A Review of Crave by Felicia Fox

A Review of Antiquity’s Scion by Zoe Miller 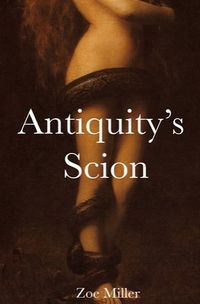 There are some stories that, from the first word written, have a tone to them that simply works. That tone is in the characters, how they speak, how they act. It is the history that drives them forward, the secrets they hold.

Sometimes there is a connection that forms in the story which, as the moment unfold, reveals that there are layers not to the story itself, but the meaning behind what one character hides and another simply knows.

To them, in that moment, the real truths must become clear.

Desperate to save her family’s failing honor, young noblewoman Chaudette Merlotte submits herself to the trial of Antiquity’s Scion–only to discover the Scion is an imprisoned succubus, and it’s her body the Scion intends to test.

Chaudette is on a mission, one in which she hopes to answer a riddle, find a boon and save her family’s honour in a time where honour is very important… even if the idea of woman having honour isn’t seen as being so possible. A mistake made, a challenge accepted and Chaudette finds herself facing the Scion… a Succubus who knows all, sees all, and offers something that Chaudette desires…

I simply adored this work in so many ways. The main characters, Chaudette and the Succubus, who is never named, but is referred to as Scion, are captivating, intelligent, and have very strong presence. While Chaudette is the main character and tells the story, really Scion is as much a strong force. Scion is amazingly witty, strong, talented, passionate, but the most important thing about her it that there is not a hint of her being stereotypically evil or uncouth.

Scion has a set of rules she exists by, meaning to her existence that she defends. But she’s more than that. She’s a speaker of truth, both her and Chaudette’s own. There’s a lovely bemusement about Scion that, for me, added so much to the story, how she related to Chaudette and what the outcome of the story turned out to be.

Past the first encounter, beyond the drawing out of Chaudette’s truths, there is a lovely simmering heat that is created between the two characters that turns, at the right moment and not in an out of place way, towards passions and discovery that told so much about Scion, who she is, and how she connected with Chaudette’s own situation, needs, and hidden desires.

The work is written well, the language spoken fits the time of the past, the actions make sense and there is a certain feel to the story that, while it is fantasy, also brings able the understanding that the story isn’t simply about the erotica, it is the story itself that matters. This is something that I look for and this author has the balance so very right by far.

The one thing about this work that did bother me was in the use of the short form ‘Mme.’ rather than the use of the full word ‘Madame’. It really broke up the story and took me out of it at times and I don’t quite understand why it was the author felt that this was a good idea. It took away a lot of the intimacy, heat, and passion between Chaudette and the Succubus, which really shouldn’t have happened.

The work ends on a cliffhanger and in doing so it screams quite loudly for a story to follow. There is a hugely important question that is not brought to its conclusion and that really needs to be told. I do hope the author does return to this universe, to  Chaudette and her unnamed Succubus to tell about what happens to them.

One of the very best Succubus stories of the year so far and well worth a read. Good characters, good story, and, most of all, good presentation makes for something special and in that I was pleasantly surprised…