A Review of The Virgin Possessed by Reed James 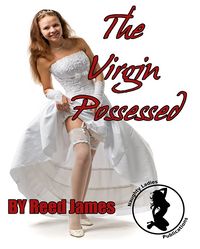 The Virgin Possessed by Reed James

As a whole, the concept of someone being “possessed” by a Succubus seems to be a rather interesting idea. The trap is, for many writers, that instead of having the person become seductive, they turn… well… let’s say that their animal instincts get ramped up and things devolve from there.

I don’t think that as an overall story arc, that the Succubus should be an excuse for a character to go on a sexual rampage for the sake of it. More so, it doesn’t work for me when that rampage just goes in directions and places where any kind of plot gets run over by the sexual encounter.

I think that’s boring to be honest.

A succubus escapes from Hell and sets her sights on innocent, virginal Kelly, and possess her. Kelly is nineteen and about to marry her High School Sweetheart, John, when her life is changed forever. Possessed by a sex-crazed demon, Kelly is taken on a journey of debauchery and self-discovery as she learns the pleasures she had long denied herself, and discovers just how strong the bonds of love can be.

Zariel is a Succubus who escapes to the Earth and finds herself drawn to Kelly. She possesses Kelly, and over time Kelly loses herself to Zariel’s thoughts and ideas. Kelly does things and goes places she’s never thought of before, and her fiancé John has no choice but to save her. The question is whether he’ll be in time and if he is, what is the price he will pay.

That’s a shame really as the first encounter that Kelly has, thanks to Zariel, is rather hot and starts the work out really well, but it is the moments after that are a problem. Kelly has a major shift in her thinking, in her wants and desires and she goes from “nice girl” to “bad girl” in a heartbeat. I didn’t care for that very much as the way it unfolded there was really no struggle or hesitation in Kelly and there really should have been.

Once past that turn of events, Kelly quite literally has her way with everyone around her and that turns towards some fairly dark themes, some of which I didn’t care for to be honest. Eventually John comes to her rescue, for the most part, and he and Kelly try to get out of the situation they are in. But the thing is that there is a specific way out that John notes and at the end of the story, the twist in it, doesn’t make sense with what happens.

It feels like the author came to the end of the work and then decided that the “catch” in the plan needed to go away so that a certain outcome would happen. As such, I felt cheated at the end of the work, and that was a problem after reading through all of the adventures that Kelly goes through.

The succubus of the work, Zariel, we never see, she’s a ghost, a shadow. Her thoughts are told, but beyond that really there isn’t anything revealed about her. In fact her name isn’t revealed until the end of the story, so through the entire work, Kelly refers to a nameless being she’s dealing with which gets a bit confusing at times.

The heat from the erotica has its moments, but in the seven chapters I found only one that I thought was hot, one other that was so-so and the rest just didn’t do anything for me. The biggest part of that is simply that story was sacrificed for heat and it shouldn’t have been. Story and heat is better than heat alone.

The beginning of the work had some promise to it, but quickly turned into simply one sex scene after the next which really didn’t do a lot for me.  Zariel as a Succubus really was one-dimensional and, as a whole, most of the characters were that as well. The ending brought along some confusion as well and that didn’t help much either.