Succubi Image of the Week 380

A Review of The Virgin Possessed by Reed James 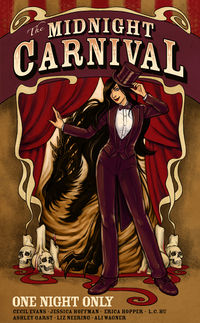 An anthology collection for review this time on the Tale. It revolves around a carnival where many supernatural beings ply their trade. And one of these is a Succubus who, quite aptly I think, runs a kissing booth there.

The sense of wonder is something that is very precious and means very much to those that can still experience it. To discover that what one expected something to be is in truth something a lot more, better, and exciting is something special. Some Succubi are that and more…

The work is the collective story of:

It’s Halloween, and the carnival has come to town.

The gates open at sunset, and the attractions are all one of a kind. Faery illusions caper under the big top while a demon hunts monsters on the midway. A psychic delivers actual messages from the dead and a real ghost lurks and laughs inside the haunted house. A werewolf plays Halloween tricks, a succubus learns the delights of a human Halloween, and a vampire hypnotizes his future prey.

Those who go to the carnival and come back have tales to tell long after the tents are gone. Those who go and never come back… well. There are stories that linger about them, too.

As this is an anthology collection, I will be reviewing the story with Succubi in it called Trick ’r Treat by Ashley Garst and Erica Hopper in which the character Crhel is a Succubus. I’ll then give my thoughts about the collection as a whole afterwards.

Crhel works at the carnival, she runs the kissing booth and she’s a Succubus. Her boyfriend Rylee promised her to show her what Halloween’s all about. Wide-eyed and amazed, Crhel learns all about Halloween traditions and discovers that what she thought she knew about that night isn’t at all what Halloween is about.

I simply adored this story. It’s a beautiful mix of a Succubus innocently learning about something she didn’t know about and all of the missteps and discoveries she makes. Crhel is a lovely soul. She isn’t a stereotypical Succubus by any means and she’s just such a wonderful character to watch and see what she does. She isn’t evil, far from it in this story, and really it feels right for her to present herself in the watt she did.

She learns about Trick or Treating, which was a lot of silly fun, picking a costume, that of course for a Succubus has to be something sexy and cute, and what happens when someone eats a bit too much candy. The joys of all of this, even when things go a little bit wrong, are heart warming and wonderful and I am so very happy that I found this work.

It is a light-hearted piece in the middle of some other stories that are a bit less fun in tone and tell different stories about different beings. As much as the rest of the works are lovingly told and wonderful reads, for me Crhel was the best story of them all.

I wish the story about Crhel was longer, to learn more about her, to see her relationship with Rylee. He is human, apparently, and I would have liked to know more about that relationship. But in spite of leaving that part of the story to one’s imagination, what’s left is that they do care about each other very much and it’s something very special to see,

The entire collection neatly comes together, creating a universe, a story with meaning to the characters within it. It’s a rare thing when a collection of stories has all of the pieces to make the puzzle complete and this one really does.

My only real regret is that the stories are short and they left me wanting to know more about the characters that I adored.

A lovely light read which reflects the passions of the authors that contributed to this universe, its characters, and their lives.