A Review of My Submissive Desire by Reed James

A Review of Seduced by a Succubus by Missy Carmel 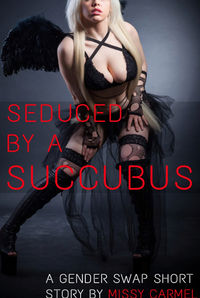 Seduced by a Succubus by Missy Carmel

I believe that having interesting characters is what drives a story forwards. Without that one thing any story cannot stand on it’s own. Having an adventure, no matter how interesting, no matter how action packed. cannot make up for that.

It is their voice that matters. They have to have personality. They have to be someone that I care about to know what happens next.

The thing is however, having characters that are interesting but cannot express themselves well? That’s where some problems begin for me at least…

Paul Taylor is lonely. He spends most nights playing online games with his friends and most days bored at his IT job. He’s never had the confidence to ask a woman her name, much less ask her on a date.

But when one of his gaming buddies tells him about a free code on an adult site, Paul’s curiosity leads him to a night with a woman—a succubus, to be exact. She’s pleased with Paul for being the man that he is and offers to reward him with a special place in the underworld as her slave.

There’s just one problem: he’ll have to become a woman in order to accept.

Can Paul resist the demonic temptress and keep his manhood? Or will he give it all up in the face of her otherworldly feminine wiles?

The first thing I have to mention is that the summary of this work really doesn’t tell the story all that well. There’s a lot of misdirection in what is told in it and as such I expected one sort of story and found something completely different. I think the best way to summarize things would be: Paul has dreams about a co-worker, but he’s never brave enough to ask her out. A day in the office turns into seeing something he never expected and then, when he arrives home, the truth about what is going on comes with a Succubus named Lilith.

Paul as a character was… lost. He didn’t seem to have much of a direction in the story up until the point where Lilith, the succubus of the story, appears. Much the same could be said about Serena as well in that she was eye candy more than anything else until, again, Lilith appears.

Lilith herself we really don’t learn all that much about, but it is sort of assumed by the author that using the name Lilith would place a mental picture about her in the reader’s mind. Mixed with that comes a good deal of dominance in her attitude and aspects, but it felt like something was lost in the translation of her character. She is a succubus, she does things to Paul, and Serena for that matter, but much of it seems not to have much in the way of direction other than to hook Paul into making a deal, and it’s one that he has really no choice in.

It’s difficult to see the threads that run through this work because it has a rather huge problem. The story is, for lack of a better way to put this, scattered. It jumps from one scene to the next without any real direction. When Lilith finally appears, again the story turns and twists in a way that just is confusing as a whole. There’s a really bad disconnect at that point in the story that makes all of the lead up to it basically mean nothing.

At it’s core the idea of this story is a good one, but I think that the outlying story about Paul’s pastimes didn’t need to be there and it certainly didn’t need to be at the end of the story. The ending on the one hand worked, but then the last page went in a direction that didn’t make any sense with what the resolution of Paul’s choice was.

Overall the concept was interesting, but the story didn’t seem to be able to move from moment to moment well. It needed focus and direction which I felt that it didn’t have. Too much fluff and not enough actual story to keep my interest in what otherwise was a good story.