A Review of Seduced by a Succubus by Missy Carmel

A Review of My Submissive Desire by Reed James 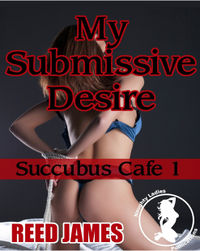 My Submissive Desire by Reed James

Succubi are the means to the desires and dreams of those that they encounter. I’ve always enjoyed that aspect, that purpose to them and with that comes the doing of good in spite of what they look like.

The way in which they are encountered can be the most interesting part about them and if that is something that is unique, makes sense, and plays out in a way that adds to the erotica, then that makes the story better still…

There is a cafe that only appears when summoned by a heart beating for deviant desires. A place where the summoner’s innermost wishes, the ones they are too afraid to tell anyone, can be granted.

When Lindsey walks into Lil Temptress Coffee shop, she secretly burns to be dominated by her husband Ryan. She wants to submit to whatever kinky acts he desires—bondage, spankings, fetish costumes. But she’s too afraid to tell him, scared he would think her a freak. “What do you want?” asks the sultry barista, and Lindsey, hypnotized by the barista’s dark eyes, pours out all her deepest desires and is about to discover if that’s what she really wants.

Lindsey has a secret that she has never been able to tell her husband Ryan. But a strange coffee shop, an expresso or two, and the knowing look of the devilish barista will change all of that for them both.

Lindsey and Ryan are two very interesting characters. The work is told from Lindsay’s perspective and with that comes her secret need to be dominated by her husband, to call him her Master, and to be submissive to him. What Ryan wants isn’t really told of at the beginning of the work and isn’t touched on until the succubus of the story has worked her magic upon the two.

The succubus herself is wonderfully sensual, powerful, and the way she looks into Lindsey, drawing out her wants and desires is just perfect and I loved every moment of that. But we never learn her name, how she got there, and how exactly everything she does unfolds as it does. She watches the couple as they fall under her spell, makes some suggestions, and enjoys the display  before she vanishes into the ether, taking the coffee shop with her.

The succubus is the door that opens into the erotica of the story which is very much a D/s story with a bit of bondage wrapped up into it. It is at times a bit harsh, somewhat uncomfortable, and perhaps a bit cruel at least to my personal tastes. I don’t like the idea of harming another or treating them poorly and that does unfold in this story to a large extent. However, it is also clear that for the couple in this story, Lindsey and Ryan, it is what they want to make their lives better and more enjoyable. I that context, in that light, it works very well, the passions are strong and they each find fulfillment in what happens.

The work is billed as being the first in a series about this coffee shop and this succubus that seems to be the owner of it and that fascinates me quite a lot. There is a lot of good storytelling that can come from this and I hope that the author does continue this series. I would however like the succubus to have a name and perhaps be a little more involved than she is somehow. Passion and joy isn’t a spectator sport for succubi and she needs to be a bit more of a power in the story overall.

I’d like to see a part two in which we learn more about the succubus, if she is one and she seems to be, her magical coffee shop, and most importantly, what her name is. There really is a lot I like about her and perhaps the next work can be less about the crop and more about the feather instead.

A small postscript to this review, one that does disappoint me about this work. Soon after this work was published, it was reissued as My Forbidden Submission under a new author name and with the entire story exactly as it was released originally save that the two main characters names have been changed and their relationship is no longer husband and wife but rather what is a step-sister/brother relationship. There are no other changes to the story, the themes, the events of the work. It is simply a cut and paste alteration of the original released work and that, truly, disappointed me.

As such, I have to lower my rating for the second work. One out of five pitchforks. The author would have been better served to use the same setting and write a new story instead of using a pale photocopy. I’m not changing my review of the original, I still think that was well done and original. I just cannot accept the second as anything else but being lazy.