A Review of The Wielder: Death Curse – Part One by David Gosnell 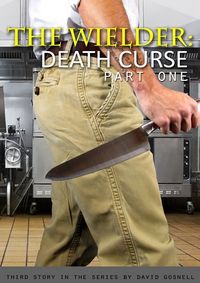 The Wielder: Death Curse – Part One by David Gosnell

I have adored The Wielder series by David Gosnell from the first line of the first book and it was with joy that the third book in the series appeared earlier this year. I have, of course, reviewed the other works in the series on the Tale here and here and a little outtake piece here as well and I do recommend the series quite highly.

The third work takes some very unexpected turns, for me at least, and it leaves quite a few questions, thoughts and concerns about what happens in this work and what will happen in the fourth work when it appears. But in all of that, there is amazing world building, character transformations, and events that conspire to turn things on their heads…

Now with revenge handed out against Maldgorath the Collector, Arthur MacInerny has pulled himself “out of the game” of being one of Earth’s protectors. He’s enjoying life and the most intimate talents of one particular succubus. Arthur doesn’t have a care at all.

That is, until he realizes he didn’t beat Maldgorath’s death curse. A curse that could potentially change him into some kind of unspeakable monster. A curse that is subverting his very nature.

Events plunge Arthur back into service as one of Earth’s protectors. Both with The Protectorate and as a double agent working with the hunted Dzemond, Ahtsag Znuul.

Unfortunately, the Dzemond found a way around the life for life lock to Earth’s realm. They’re coming and potentially in great numbers. Mankind is not quite ready fight back that kind of invasion or those kind of heartless conquerors.

Arthur finds that once again, he seems not to be able to catch a break. Changes are forced upon him, upon those that he wields and as things unfold he loses much… as do they. Friends are few and far between as the universe conspires to bring about events that none can see in their full effect and those that might be able to do something are torn apart from within. They say that some will deal with the devil, but in truth there are others far worse.

It was wonderful to see Arthur return after the events of the previous work and to see what the consequences of the time between when we saw him last and the events of the here and now are told. There are a great deal of complications for Arthur in the aftermath of what seemed to be a victory in the prior work. There are layers of personal, public, and private issues and events that tug on him and keep putting Arthur off balance as the story is told.

At the same time that Arthur’s story of coping it told, there is the added complication of Silithes, who also finds herself being pulled in unexpected directions, but also there is strife, complications, and of more concern, loss and betrayal that swirl around her. Adding to this is the beginnings of an amazingly complex subplot which revolves around the Cubati, Succubi and Incubi both, and the internal society and existence they have.

Beyond them, the appearance of beings we have seen but a scattering of representative characters before adds to the sense of danger and, more to the point, threat that is coming headlong to Arthur’s world. There are a lot of dark moments to be found, but then they are dark beings with a dark purpose. The manipulation not just of the world as a whole, but the characters themselves is very interesting as it’s played with a goal of being just subtle enough to make the events and actions enough to hide the ones that are pulling the strings.

As the plots tangle and bind together, there are some lovely touching moments when characters such as Karen and Znuul have secrets revealed that were hinted at in the preceding works and in the aftermath of choices they have made, new questions arise and with them come both assurance on the one, but quite some worries on the other.

It is a fast paced work which draws you through the pages quickly if you are not careful. As much as you want to see what happens next as quickly as possible, it’s important to put the pieces together and see what lies beneath. Personally I think the author did that amazingly well. Along with the action there are some violent moments which reflect on how things are coming apart around Arthur as a whole, but also within himself.

But there is a moment, an instant where Arthur makes a choice, and in asking for that, changes his world and that of those he cares about deeply. Through that change the impact on Silithes brings about a deep change which left me wondering about several points in that story. There’s something not said, which I think will be in the next work, and in that will come the answers to, I hope, the question of the Succubi and one of the secrets they hold tightly to themselves.

The work closes on a moment which leaves so many tangled plots open, which must of course be expected. The ending is, at least for me, tragic and sad. There are hopes, but there is also so much for Arthur to manage through and the world around him to deal with. But, of course, this means that there is story to tell and that is what is the mark of this series.

A few minor nitpicks here and there in editing, but nothing that took away from the story as a whole. Arthur’s life continues to be a complicated maze for him, and for us, to unravel. Things are grim, of that there us no doubt, but at the same time the underpinnings of hope are there… They just need to be gathered and brought to the fore.

I’m looking forward to the second part of this telling of Arthur’s story, where things go from here will be both a dream and a nightmare…