A Review of My Mate, The Incubus by Sinn Lee

A Review of The Millennium Falchion by Dou7g 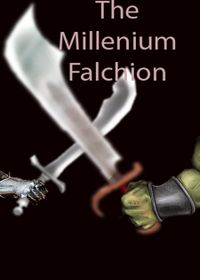 The Millennium Falchion by Dou7g

Eventually there comes a time where characters need to make a choice. It marks, in a lot of ways, not so much where they came from, but rather where they are going. They say that getting there is half the fun, but that’s not always true. When it isn’t that’s when the true mark of one’s character comes to the fore.

In this installment Edmund the scholar and the ogre find themselves in a battle with the Duchess’s Captain and the knights of her guard. A battle ensues for the fate of the kingdom while Megan continues her seduction and corruption of the Duchess as both Edmund and Megan try to repay the favors they owe Kendra, the beautiful red haired succubus.

Plans unfold and change as events continue to swirl around Megan. Choices are made, battles are won and lost. There is loss, anger, despair and in the end, the choices each makes defines their future and that of those around them… Whatever the cost.

By far this the the strongest work in the series by far. It’s a lovely mix of adventure, a touch of romance and a revelation for many of the characters that helps to solidify who they are, what their goals are and who, exactly, can and cannot be trusted.

It isn’t just Megan that has to make a lot of difficult choices, that’s true of every one of the characters and it’s telling how each responds to the events around them. Some make really bad decisions that put them at odds with the others and it’s that strife that reveals in the end who can, and cannot, be trusted. But it’s more than that. There’s a sense that in this work Megan, Kendra, Edmund and Phil become a family, if an odd one, and when that comes there’s a certain… relief I think is the best way to put it among them.

There’s a moment between Edmund and Phil that has been long in coming in the series and it pays off delightfully when it does. The same, in a way, can be said about Megan and Kendra, but it’s somehow slightly tragic, or foreshadowing in tone and leaves a lot of questions that need to be answered about them.

Beyond the main characters themselves, the events they stir up, what Edmund, Phil and their ragtag group encounter along the way makes for a wonderful adventure which I did enjoy. Through that adventure there’s some betrayal, some acknowledgement, and, most importantly, there’s proof that one cannot accept what’s seen alone. There’s more to everyone, in everyone, it’s just the need to spend the time to figure out who they are and not dwell on what they are.

There’s an interesting dynamic between Megan and the Duchess that unfolds in this work which I thought worked well and where it goes, how the relationship changed tells a lot about how Megan herself has changed. The moment where truths are revealed to each is painful, there’s no doubt of it, but as well there the hint of something more within that as well.

Kendra makes herself known again in this work and when she does, and the adventure comes to its conclusion, it’s clear that while she is a Succubus, there’s more to her and she shouldn’t be taken lightly. At the same time, like Megan and Edmund, she makes choices, forces others as well, and there’s a point at which her own nature comes into conflict with her desires. That’s something that will come to haunt her going forwards.

A light touch of erotica, a little bit of a D/s relationship and some suggested mind control themes at one point mixed together quite well and added a lot of depth to the story. But it is the characters, the stories of what happens to them and where they wind up that makes this work shine brightly.

Really an excellent climax to the series that leaves open some very interesting paths forwards for all of the characters. Kendra’s still quite the mystery and that is deepening as the story goes on, but that’s all part of the fun here. The real question comes to what will happen to Megan next and how she will deal with the things she has done.