A Review of The Millennium Falchion by Dou7g

It could be the beginning of a Country Succubus Costume?

A Review of My Mate, The Incubus by Sinn Lee 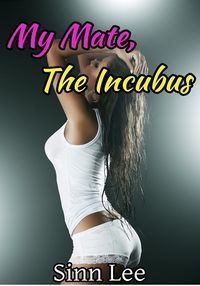 My Mate, The Incubus by Sinn Lee

The problem I have with stereotypes comes up a lot where Succubi and incubi appear in stories. It amazes me just how many writers have to go with the trope of them being evil… or worse for that matter. It should be clear, I think at least, that each and every one can be, and really should be different.

Then, the question becomes, do you take the chance to be with them or to end them? It’s a hard choice to make in the end…

Elissa learns about creatures known as “incubi.” As a slayer, it’s her job to kill them. But she’s never killed before in her entire life. How could she? It wasn’t her place to end someone’s life if they hadn’t done anything wrong. It’s this mentality that brings Dorian to her dreams. He’s been visiting her the past couple weeks and the two of them have become quite intimate in their steamy activities in the dream world. But now that she knows what he truly is, she intends to meet Dorian and find out how blissful his physical touch can truly be.

Elissa finds herself sucked into a world where creatures like vampires and zombies are real. The problem is that world is the one she lives in already and now she’s part of a group that goes around dealing with the “problem.” Problem is that she’s been watching the others going around and killing… and she’s not sure they are doing the right thing. One night as she is reading the book she is responsible for, she comes across the legend of the Incubi. And then she encounters Dorian in her dreams and has to come to a decision.

What I found to be the most interesting part of this work was the comparison between Elissa and the other slayers that appear. Elissa isn’t stereotypical but those that she is with most certainly are. They seems to think they are “right”, have no reason to consider alternatives, and, in short, are the typical “do good no matter the cost” sort of characters. Elissa… thinks. In doing so she is a better, stronger character and that carries the story along really well.

When Dorian appears, he again, is not stereotypical. He admits that, yes, some Incubi are evil, some aren’t and he knows right from wrong. He does, from the first moment, care quite a lot about Elissa, wants to be with her, and prove that he is exactly what he appears to be. That he is not a stereotypical creature of evil.

It’s that connection, the providing of that proof and the relationship that brings that I really enjoyed  very much. There is a lot of wonderful background, setting and more in the story but it really comes back to the question of “why should I believe you” that drives the story forwards.

The heat in the story is well done, the scenes between Elissa and Dorian are hot in all the right ways, but also the acceptance between the two of them has just as much heat within in. The story is just a cute, passionate romance and it worked really well here.

It is short, which is a problem with this author at times however. The work ends on a question mark, a thought, a concern that really needs to play out and bring the story of these two characters and those around them to a conclusion. What happens when the other slayers find out about Dorian? What happens to Elissa as a result? What can Dorian and Elissa do about it? I have a thought, it is Succubus related of course, and that book that Elissa has points me at that obvious thought… I really would like to know.

One of my personal favourites from this author. I would like to see this continue as a series, which from all intents seems to be a possibility. There’s a really wonderful connection between Elissa and Dorian and I’d like to see where that goes. I don’t expect a happier after ever, not with the situation they are in… But where the story could go, and what might be possible would be something to see.