Succubi Image of the Week 378

A Review of BSI: Bureau of Supernatural Investigation by C.J. Pinard

A Review of Tethered by Pippa Jay 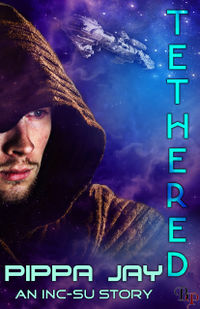 What is the place of Succubi and Incubi in science fiction? That is something that I have thought about in the past and i came to the conclusion that they could very well have their own world and yet still exist within the galaxy as a whole.

The question of the society, of who and what they are is a more open one and it allows for the Succubi and Incubi to be transformed. But at their core there are some things that they need to have. They need to know passion, they need to see worth in themselves, and in the end they need to believe in themselves.

That’s a story that I find fascinating.

For Tyree of the Su, being an assassin isn’t simply something she was trained for. It’s the sole reason for her existence. A genetically enhanced clone—one of many in Refuge—she’s about to learn her secluded lifestyle, and that of all her kind, is under threat by a race capable of neutralizing their special talents to leave them defenseless.
For Zander D’joren, being a diplomat has not only cost him his appearance, but also the love of his life. Scarred, grieving, he must nonetheless continue in his role as co-delegate to the fearsome Tier-vane or risk a conflict that could only end one way.
Now both of them need to keep each other alive and maintain a perilous deception long enough to renegotiate the treaty with the Tier-vane, or throw their people into a war that could wipe out Terrans and Inc-Su alike. But there’s more at stake than humanity, whether true or modified. Can the love growing between them save them both? Or merely hasten their destruction?

Tyree is very good at her role in life. She is one of the Inc-Su, a race of beings that are very much like the legendary Succubi and Incubi. Tyree’s role is that of an assassin, but when she is told she must take the place of one of her clone sisters to save the universe, things begin to unravel for her. She questions her motives, her past and what she knows about herself. She also discovers something that her kind have not been allowed. The capacity to love and to be loved. And what that new emotion will teach her.

Tyree is a very complicated character from the first moment she appears in the story. She’s a bit headstrong, her will and abilities are just as powerful and as a female lead character she is well suited to the role of a force in her own right. But there is a part of her that her own society had no use for and has tried to, for lack of a better explanation, burn out of her and her kind. There’s no place for love and compassion in the world of the Inc-Su even though their trade is through sex and with that comes some of the abilities of the legendary Succubi and Incubi.

Tyree has no horns or tail, she does not look like the Succubus of legend physically. But she has several powers that are Succubus-like such as being able to turn into mist and pass through walls or other items. She also can use a bit of mind control over others, and she, like the legend, can kill others through sex with them. With that there is also a need to feed on sexual energy to live which is also somewhat Succubus like. But with all of that there is a certain amount of coldness in Tyree that takes away from her a bit. As the story is told that changes, and the changes are exactly right, but somehow I felt like beings for who sex and sensuality is such a part of who they are I would have thought there would be more… soul… in their society and in themselves.

When she meets Zander, she begins to lean that there is a part of her she has buried deeply because of what her society forced her to do. She finds her thinking changing, turning towards Zander and as that happens there is a change not so much in who Tyree is, but rather what she wants. It is that growth in her character, the shift from cold and calculating towards making a connection, being wanted and wanting in return that I really did enjoy. Tyree at the beginning was nothing in comparison to Tyree at the end of the work and it is a change that does not come like the turning of a switch. It happens over time, slowly and in a way that is amazing to watch.

Zander is as headstrong as Tyree, perhaps a bit more so, at least he is single minded for most of the work. Again there is a shift from he mourning his lost wife and having to deal with Tyree being there and looking exactly like his wife. The shift in his thinking is a bit more hidden, not perhaps as bluntly told as the story is see mainly from Tyree’s viewpoint and that’s a bit of a shame as I would have liked to see when the shift in going from “just being” to “living” happens.

The story is well told, the universe is richly detailed and the work holds onto the reader and keeps you turning the pages to see what happens next. There is a touch of erotica in the work which does not detract from the story. The moment isn’t wrong for when it appears and I enjoyed the way the connection between Tyree and Zander is transformed through that moment and the moments that come before.

The writing is solid, there really wasn’t anything that took me out of the story. At the end I was left wanting to know what happens next between Zander and Tyree, what happens with the Inc-Su, and what the future holds for them all. The work as a whole tells a captivating story and I enjoyed that.

The one issue I had with the story was mainly in the Inc-Su society, the harshness of it. The punishments were severe, the threats that pushed Tyree to be who she became from where her life as an assassin began were very hard to read and they, at least for me, took some of the joy out of the story. I do understand that it needed to be the way it was for the sake of character growth and to get the characters to progress. But I felt that it might not have been necessary to tell considering where the rest of the story went.

A unique version of the Succubi and Incubi that I found riveting, well considered, and with that came a history that told much about them. I wish the race as a whole were more passionate, more in tune with themselves more than anything else and that hardship didn’t quite work well for me. In the end, Tyree’s passage from who she was to who she becomes makes up for much of that and I do hope there is more to be told in this universe about the Inc-Su.

I don’t believe their story is finished yet.