Some Thoughts by TeraS

A Review of The Initiation Of The Incubus by VZ Fauchard

A Review of Masquerade on Poker Night by Victoria Pond 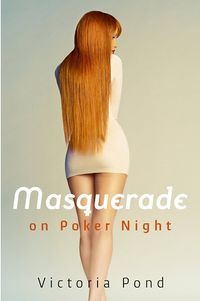 One of the things that I do enjoy in stories about Succubi is when they can be the hero of the story. It’s more wonderful when the Succubus of the story is intelligent, has a strong will, and does the right thing for the right reason.

The thing about being a hero is, when you think about it, you act because it is the right thing to do. You don’t consider who is in trouble you don’t worry about what they need help for. You simply help if you can, comfort if possible and… occasionally…

Evan should never have cosigned for his brother’s loan. Now creepy loan shark thugs are after him. When he squeezes into a minidress and finds a busy café, he’s sure that he can hide. But the thugs still find him. Luckily, the café’s owner is a succubus who is more than capable of protecting this “damsel” in distress from a bunch of male goons.

Evan has a problem. The problem is that his brother asked him to help with a loan and now the people that want collect are looking to do so from him. Finding a wig, dress, and heels, he transforms himself into a waif of a woman and goes to hide at a small cafe. He then finds that a Succubus named Miriam and her sister Beth own the cafe… and for Evan and Beth, it’s the start of something unexpected and wonderful.

Evan is a fascinating character in many ways, not the least of which is his inherently kind and caring personality, how much he cares about others, and what he’s willing to do for them. He really stood out for me in the story in how he related to Miriam, how he was attracted to her, but most of all, the connection that comes between himself and Miriam that I think is one of the most wonderful passages that I have read in quite some time.

Miriam is a rather unique Succubus in some ways and thankfully she isn’t stereotypical or flat in how she expresses herself in the work. Whether she has wings, or a tail, isn’t really spoken of but it is quite clear that she is a Succubus, she has the powers of one to control through sexuality and though that have dominance over males foolish enough to cross her path and fall upon her somewhat darker side.

Her sister Beth however… really isn’t talked about all that much. Beth makes a momentary appearance, pushes Miriam in the direction of Evan and then vanishes into the background for the most part. I think that’s a bit of a shame as what little is told about her from the perspective of Miriam makes Beth something of a mystery and it is one that prods a bit. There is a story around her that isn’t told and I would have liked to know more about.

Regardless, the core of this story is the encounter between Miriam and Evan, how that unfolds over the course of the evening and really that is an amazing thing to watch the author tell. There is a touch of erotica, a bit of submission on the part of Evan to Miriam, and with that, Miriam’s dominance peeks through here and there in the story. But it’s more than that and for me, that was the part of this story that I liked most of all.

I was fascinated by how the relationship ebbed and flowed between the two, how at one point Evan was in control and in the next Miriam was. The connection between the two just felt right, worked amazingly well, and made this work really something special.

The work came to a close at a deliciously perfect point that I thought brought the story to a satisfying close. But in spite of that I would like to see more story about these characters, where they go from there, what happens next are open questions that I think need to be told. The question about Beth, the one she is with, and what that might mean for Evan and Miriam’s future i think would make for a really telling part two… Perhaps that will come sometime.

Lovely story, enthralling characters and the moments they share are beautifully told. As a whole the work is a cute story about perception, need and discovering that sometimes the someone that you need is there in front of you… You just need to be able to see, try, and, most importantly, trust.

It’s not the easiest thing to do, but if you can manage it… Anything is possible.