A Review of Demon Lover by Wayne Nix

Some Thoughts by TeraS

A Review of Demon in Disguise by Roxie Lee 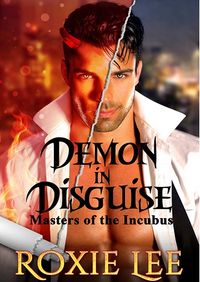 Demon in Disguise by Roxie Lee

Once again a review of a work that was intended to be the first in an ongoing series which never materialized in the wake of it appearing. It’s a shame this happens so often because there are a lot of good stories and ideas that come from these works that wind up leaving the promise they hold behind in time.

There is such a thing as soul mates. Where the questions begin is: What does that really mean? Does it change you, do you have any kind of choice in the matter, and if not, does the one that claims you actually have the understanding of what that really means?

A Demon by nature and a soul catcher by trade, Kurt Samuelsson is enchanted by the beautiful dark-haired stranger who visits the club. He instinctively knows she’s everything he needs in a woman, and is therefore his promised one—the soul mate who will be his for eternity.

As Lacey discovers all manner of strange phenomenon pointing to demons and devil worship at the infamous venue she becomes frightened, but also sexually drawn to the good-looking guy who always seems to be staring whenever she glances in his direction.

Lacey hadn’t reckoned on falling for the tall, enigmatic stranger with the mesmerizing eyes, and as a result her priorities become unclear.

Should she sample the demonic sexual fruits on offer from Kurt, or should she see sense and simply run from Incubus with her story, never to return again?

Lacey goes with a friend to the Incubus club, where she believes that something odd is happening there. She meets someone who takes control of her, mind, body and soul, and then has no other choice but to submit to his command.

The theme of this work revolves around the idea of soulmates which I hoped would be approached in a tasteful way. The thing is that, at least for me, it really isn’t. There’s a good deal of “instant” mind control being used on Lacey by Kurt, the incubus, and it feel very wrong when Lacey’s personality goes from independent, intelligent woman into simpering love slave. It’s a bit worse when all of the talk of love and compassion that Kurt thinks about after meeting Lacey gets tossed aside for a erotic scene that takes a position on D/s relationships that I cannot subscribe to.

Lacey’s treatment, after her mind is changed, her past is forgotten and her world is twined around Kurt’s finger is what many poorly thought out and misunderstood ideas about D/s relationships go. There’s no compassion, no understanding, no depth of caring or concern. It all circles around Lacey falling to her knees and Kurt doing whatever he wants to her. Incubus or not, that just didn’t have any heat for me and I didn’t find that enjoyable.

All of what I didn’t enjoy takes up the latter third of the work and before that point occurs, the story prior to that moment is so much better and so much more interesting. Lacey has a past, a goal, a life and a purpose. She’s conflicted in a lot of ways, but tries as well as she can in the situation she finds herself in. Even when she meets Kurt for the first time, she doesn’t fall under his spell completely and that’s good because it’s more interesting to read the struggle, to see her thoughts as she experiences events and try to understand what happens.

The same can be said of Kurt, to a point, in that his background and story are interesting, if only fleetingly delved into. Again, before he turns into “Master” he is much more interesting and has more depth than when the erotica starts and his attitude changes dramatically, every bit as much as Lacey’s does.

There is a lot unspoken in this story, mainly around why Lacey’s personality changes and how. There’s also the question of what the club is about, what the plans of the incubi characters are, what some various references mean and so on. It’s confusing at times to trace the path of the story and it need not have been.

In a lot of ways the story gets washed out by the D/s themes, how Lacey is treated and how things are spoken of before that moment. Talking about caring about soulmates and then treating one poorly doesn’t feel right. It’s a problem that shouldn’t be. Yes, there are dominant characters and yes there are submissive ones. Both should be treated with respect in a story. It is a two way street, mind changing powers or not and that doesn’t happen here.

All of this was meant to lead towards a series and the next work in it, but that never has appeared. As a result the work ends at a point where there are many questions, many paths to take, and a lot of explaining to do. Whether or not that would have transpired in the next work cannot be said, but at the least I would have wanted to understand what, exactly, soulmates mean to the incubi in this work. From all appearances, my definition of that word isn’t what this universe believes it to be.

I have to assume that a lot of the open questions left in the wake of this story would have been answered in the next work in the series, but that hasn’t appeared as of the date of this review. I want to understand how things work in this universe, there’s too much hand waving and not enough substance at times. The D/s theme was uncomfortable and far too one sided for my personal tastes as well. Rushing through a story simply to get to the erotica is a problem and considering the building up of the story before the main characters meet, what follows afterwards is a misremembered dream.