A Review of Surrender by Alisa Easton

A Review of the Incubus Series by Jason Daniel Kowalczyk 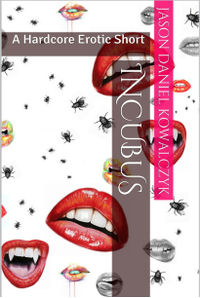 I’ll be reviewing a short series about an Incubus this time on the Tale. Personally I don’t enjoy horror stories all that much. I don’t enjoy watching pain and suffering, or worse, happen in them. If the story holds my interest, then that for me is something positive.

However, an interesting story cannot keep my interest when the works in question need an editor so badly that it hurts to see all of the errors that crop up.

This is a series revolving around horror erotica, which a slight emphasis on the horror over the erotica. There are some very violent scenes of death and destruction, there are moments where the blood is flying in buckets. The characters are violent, there is no doubt of that, and with that comes an attitude, experience, and need that just made the series difficult for me to read.

We never learn the name of the Incubus, and while he calls himself one, and he does state that he takes souls as well, what his form, the real one, appears to be is more monstrous, beast-like, than being classically Incubus in form. His thoughts are violent almost all of the time, his needs are animalistic and that coupled with the horror aspects of this series just didn’t do very much for me.

There is a Succubus as well that appears in this work, but again in her case she isn’t all that interesting as a character from what is seen of her. There’s a lot of confusion in the series about her, and in that comes a moment where the story takes a turn for no clear reason. When that happens, and the main character becomes entangled with her… it takes a turn that really it didn’t need to.

I mentioned this series was more horror than erotica, which it is, but there are moments of domination, both male and female. With that comes some very violent scenes of erotica that might be a heated read for some, but I didn’t honestly enjoy. Again, that’s my own issues with horror works more than anything else. But there were other problems as well with the series.

There are several things about the series that I had problems with. The main one, and it is the one that just removed any interest I had in the series as a whole was the overwhelming number of word, spelling, and other errors that made the series very hard to read at times. The other thing that bothered me was having to read the last page or two of the preceding part of the series before the next part began.

The story could have been something, it tried to be, but the process of creativity ran over the need for editing and making the work read, look, and be better. That’s a shame. Very much so.

I think the author would have been better served to gather all of these parts into a single work, find an editor, and then take that editing to heart and create something better from what is really a series of fragments.

I’m giving this series one out of five pitchforks.

I wish for a lot more regrettably.