A Review of Succubus Tales: The Merging by Gregory Michelson and Julia Silvereyes

A Review of Sweet Dreams by Benjamin Daniels 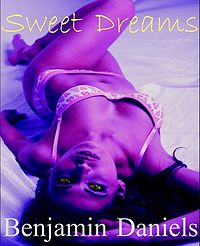 Dreams are powerful things. They reveal our truths, hopes, pasts and wishes about the future. They offer a doorway into our souls and in doing so, we can discover things not known… or meant to be known.

Even beings that can enter dreams, exist in them, shape them, and sometimes change them, have dreams of their own. The problem isn’t the dream of course. It is the nightmares that come unbidden within the dreams…

Jahi’s job is as a seductress in Lilith’s house of pleasure. She can see into their sexual fantasies and give them every sexual desire possible.

Jahi is special; she holds a power beyond just sexual pleasure. She can transform into whatever the clients wish for, but what Jahi really wants is to fulfill her own desires.

Prescott is her one and only desire, there is only one problem….He doesn’t seem to notice her… Or so she thought.

Jahi is caught in a situation. She works for Lilith, her role to enter into the dreams of others and give them what they desire. The problem is that Jahi’s own desire, to be with an Incubus called Prescott, is something she believes will never be.

Jahi isn’t quite a Succubus, though her powers are very similar to one. She doesn’t quite look like a succubus either, though in her own way she has a haunting beauty of her own that is well told. She isn’t quite as sexually over the top as many other of the characters in this work are and that’s actually good because it sets her apart from the others she faces.

Lilith, at least in this work, might be a Succubus, but it’s difficult to say if she is exactly. There really isn’t much in the way of evidence that Lilith is a Succubus, though she is somewhat brutal in her methods and actions on occasion. She appears sparingly in the work and in during so it makes her more of a mystery to wonder about.

Prescott, as an Incubus, is both domineering and at the same time holds secrets and a past that is unique and fascinating to watch as it unfolds. There is a relationship that finally comes into force towards the end of the work which is an amazing series of moments between himself and Jahi. It is a nice change of his attitude and image that he shows when both he and Jani admit their feelings for each other before the story moves towards its climax.

But along with all of the wonderful characters comes an underlying story that have a number of twists and turns. There is a plan of some description going on around Jani, but the purpose of that plan, what role she has, and what it all means isn’t made clear. The work ends on a cliff-hanger for Jani where she questions all that she thought was real, right, and meant something.

That ending is concerning as it brings into question Lilith, Prescott, and as well several Angels and Devils that appear during the work. Ending in that way does, of course, make the reader want to see where the story goes from here, but there doesn’t seem to be another work in the series so, as such, the questions might never be answered which is a shame.

While the characters and story are excellent, the plots are involved and there is passion within the words, there are, regretfully a number of mistakes in the work, spelling and words that aren’t quite the correct ones, that tripped me up from time to time. Being that the work I read was the third edition, according to Amazon at least, I would have thought that more editing would have been done to correct them. The other problem is that ending on a cliff-hanger should lead to another work at some point, which this author seems never to have written.

To the best of my knowledge there never was a following work and that’s a shame considering all of the story, characters, and effort that is so clear in this work. The work was reissued on Amazon in 2013 and while there are a pair of stories written by this author in the same universe, they aren’t continuations of where this story closes. Perhaps someday that will be…