A Review of Sweet Dreams by Benjamin Daniels

A Review of Succubus Tales: The Merging by Gregory Michelson and Julia Silvereyes 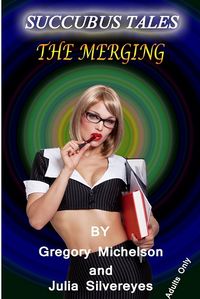 Succubus Tales: The Merging by Gregory Michelson and Julia Silvereyes

The beginning of new series about a Succubus today on the Tale, but quite a recent one, one that is written by an author in the MC community, and one that I think starts off the series in one of the most interesting ways that I have seen in quite some time.

Some believe that power is everything, that it solves all problems. What they do not understand is that there is always a cost and, sometimes, there’s a Succubus who’s always looking over your shoulder and whispering into your mind. Whether you obey, or the Succubus does, that depends on you.

Daphne wanted power, but not the decades of mystic study. So she found a shortcut, calling up a spirit to do her bidding.

Daphne comes into possession of a means to power, one that she intends to use to get everything that she wants. However, the universe plays by slightly different rules and Daphne doesn’t quite understand them for what they are. Her summoning brings a Succubus and then Daphne’s world changes as do those around her.

At the beginning of the story, I wasn’t quite sure that I was going to like Daphne as she was, to a point, rather self absorbed and single minded. As things went on that turned out to not be a bad thing and actually lent itself towards making her more interesting as the story went onwards. She has a strong force of will that comes out in her “fight” with the Succubus and as that unfolds in-between the events that come out of Daphne’s summoning, it is a interesting battle of wills between them.

The Succubus herself has that lovely little smile in her voice when she first appears that, for me, is what I look for in a Succubus character to hold my interest. As she becomes more present and her form is revealed, she is the picture of a seductive and powerful Succubus, horns, tail and all. But what’s the most important thing about her is that she isn’t stereotypically evil. There’s a purpose behind her actions of course, and she’s quite determined to win the battle against Daphne, but as well she seems to be holding back something or trying to hide it by overwhelming Daphne with pleasure.

Those scenes, interspersed among some hot flashes of erotica that come as a result of Daphne’s summoning and the Succubus’s power, are a lovely mix of Succubus erotica, passion, and a little bit of mind control that I thought was just written in the most perfect way. It was one of the best scenes of its kind that I’ve read this year really by far.

I liked the breaking up of what happens to Daphne by the events that happen to those around her and in those scenes there is some very subtle and hot mind control erotica that works really well. How they are influenced by the Succubus arriving, how their thoughts shift and then how things unfold was very well done and I liked the majority of those scenes. Placing them in the story as they were made the work flow better I thought and it reflected the fight for control between Daphne and the Succubus nicely.

At the climax of the work, Daphne discovers that she has a rather serious problem to deal with, a Succubus to whisper into her thoughts, and the power she wanted, but doesn’t know what to do with it. That’s a really good place to end the first work of a series and it really sets up a lot of interesting plots and paths for the characters to take.

A solid story, a very good concept with captivating characters that I loved. Lovely hot erotica that touches both Succubus themes and mind control ones as well in a way that feels right, reads well, and makes sense in the universe this work is set in. In the initial copy of the work I read there were a few, very minor, word errors, but they didn’t overcome my love for Daphne or Miriam. A smart, sexy, and enjoyable read by far.

I hope, dearly, that the next work in the series will arrive soon… There aren’t enough Succubi named Miriam in the universes and I think that this one will be quite the delicious one…