A Review of The Bygone Times Saga by Andre Alan 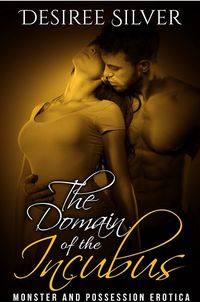 The Domain of the Incubus by Desiree Silver

A review today on the Tale of a short series of works, two of which involve Incubi and the third which has a Succubus as the main character. They are all, to a point, connected together and in their own way they are both quite good and perhaps not so much so. The series is called Monster and Possession Erotica, which is a bit general in tone I know. but that is what it is called.

Seduction is, at times, a two way street. Sometimes it isn’t and then, if you aren’t looking, you can find yourself with no where to go…

A young innocent woman attends a luxurious, fancy dinner party in the city. Little does she know that soon her life will be changed completely after she is utterly dominated by a seductive demon and his ominous friends.

Alexia is invited to a club with her girlfriend. Seeing no harm in doing so, she goes to the club and finds that things aren’t exactly what she expected them to be. Meeting Evan, an incubus, and some other supernatural creative turns into something more than unexpected.

I honestly didn’t like this story very much for many reasons. The writing was awkward, uneven and had a lot of spelling mistakes as well. The dialog didn’t sound right, again was awkward, and read like the author didn’t understand English slang well. The erotica wasn’t really all that hot, didn’t add anything to the story and just left me cold as a whole.

Alexia herself is interesting, I liked her character and how she tries to deal with what happens to her, but there was so much strangeness in the storytelling that I couldn’t get past that. That’s a shame because at first I liked the story, but then as things progressed it all went downhill and I just wasn’t interested any more.

As for Evan, the incubus of the work, he is nothing more than a means to have a character dominate over Alexia, draw her towards the erotica and then force her into a series of situations with other supernatural beings that, again, did nothing for me. His dialog was stilted, read poorly, and just saying the words out loud told just how wrong they were.

The erotica is violent, uneven, had very little, if any, heat in it. It reads poorly as a domination story, tending towards saying that to be dominant over another you must do violence, be gruff, nasty, and care not all that much about the other person. Again, this, for me, isn’t what a D/s relationship is, and as such that made my enjoyment of the story fade the further the story went along.

Uneven writing, many spelling mistakes, characters that hold no interest, a plot that only serves to push the main character into a series of sexual encounters that really have no heat in them. All in all I expected more and didn’t see that. 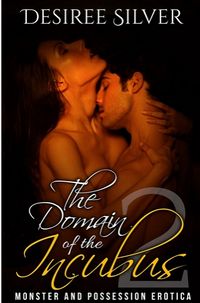 The Domain of the Incubus 2 by Desiree Silver

I had hopes that the next work in the series would be better, that the author might care to edit the work better, find more character in their characters and tell more story than simply one sex scene after the next. The book blurb gave me some hope that, perhaps, there was something more to be see here.

Sometimes we are the product of our situation. Sometimes that situation leaves little in the way of choice, direction, and understanding. What happens then?

This is the tale of Alexia, friend of Julie from the first Domain of the Incubus. Entrapped by a powerfully seductive sexual demon, she is surprised to discover seeds of kindness, and even possibly love, from her captor.

Alexia’s life has changed since her encounter with Evan. She bears his child and what that means is a question she has no answer for yet. When Evan reveals a secret that Alexia didn’t know, things get more complicated. When Julie reappears, then things are stranger still.

Again, sadly, I was disappointed in this work. Still uneven in writing, still so many mistakes, still so many uninteresting characters, still so much pain and suffering and violence that what little story there was got sideswiped by the over the top erotica that just didn’t have any heat in it.

Alexia again starts out as being interesting, but as the story progresses, any sort of character development that occurs, and there is some, gets smothered by moments that just read wrong, feel wrong and play out poorly. I will note, as an aside, that Even reveals to Alexia that she is the child of an Incubus, but whether she is a Succubus or not isn’t explained or touched on.

The story turns very violent when Alexia gives birth, the point of which… well there isn’t one. Julie appears again and she’s the plaything of the other supernatural beings around her. It’s shocking how her attitude towards Alexia has changed, how she has become a schemer, intending to get rid of Alexia anyway she can.

At this point in the story, it felt like a really bad soap opera and I just lost all interest in it. I didn’t care at all about anything that happened, the erotica did nothing for me again, and even with the slight surprise I had over Alexia’s past, there wasn’t anything done with it save that Alexia didn’t die after giving birth, which, according to Evan and others, was the fate of “normal” humans most of the time.

The book blurb talked about a change in Evan’s attitude, but honestly that didn’t play out either. A the beginning his attitude towards Alexia is shockingly bad, he treats her poorly, but then, all of a sudden, when she gives him a child, then he becomes “nice” which really turned me off further still.

Poorly written, paper-thin characters, and there are a lot of them that pop in and out of this work for no reason at all. A plot that didn’t go anywhere save to make the story more complicated. Erotica that didn’t have heat, didn’t have a purpose, and was, overall, violent and dispassionate in nature.

The work comes to a close, but leaves everything open, not completing any of the plots or stories that had been started. Not that I expected much after the first work and to be honest I wasn’t all that surprised when it wasn’t. 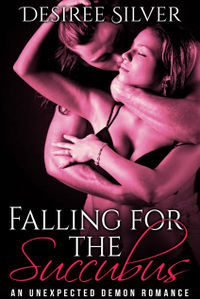 Falling for the Succubus: An Unexpected Demon Romance by Desiree Silver

I had assumed that the third work in the series might, just might, possibly turn the corner, settle down, and be something to interest me. But instead of continuing with these characters, the author turns to some new ones and, of course, one of them is a succubus.

The danger of entrapment is that you can be trapped as well. Then the problem becomes who is in control, who takes the lead, and in the end, who really cared in the first place?

The third work in the series is:

Isabel, a sultry and seductive modern day succubus, discovers too late that she has made the wrong choice when she picked a young man who happened to be a student of demonology. William decides to keep her around as his own, trapping her, fully aware of the dangers… Is he falling for her, or she for him? Only time will tell…

Isabel goes out to a bar looking for her needed fix. She encounters William, who knows exactly what Isabel is. After a night of being together, there is a connection between them. William takes a risk, Isabel relents, and then fate takes a hand in their lives and what comes afterwards.

I liked Isabel for several reasons, the main one being that she has a heart, cares that she doesn’t kill others because of what she is, and tries to protect William. She’s not quite stereotypical in that way, nor does she have horns or a tail, but regardless she’s intelligent, has personality, and gives a damn which, considering the other works in this series, is a refreshing change.

William is every bit as interesting as Isabel. He’s smart, he is willing to take the risk to tell her that he loves her, and in the end, offers Isabel himself for the simple reason that he cares about Isabel. He doesn’t care about the succubus. He’s kind, caring, and that comes through quite clearly in his mannerisms and what happens in the story.

The erotica is a lovely hot flash that isn’t over the top but leads quite well into the latter part of the story where both characters have to some to terms with the possibility that they love each other. There is intimacy, passion, and a sense of them belonging together.

The conclusion of the work is, in many ways, sad and tragic, the events being clearly telegraphed in the prior pages. But there is a neat little twist involving an angel, a truth, and a gift that Isabel is given that I adored in spite of the somewhat awkwardness of the last page or so of the story.

With all that I liked, all of the positives, there are still a lot of problems in the work. One glaring point is that at one point Isabel’s nickname is Izzy, then it switches in the next sentence to Issy. That really bothered me. Then, again, as happened in the prior works, there are a lot of editing mistakes, spelling mistakes, awkward sounding conversation, sentence structure that made no sense at all. Many silly and minor mistakes that a single editing pass could have fixed.

It really is a shame because this is a really good love story about two characters and all of this never should have taken away as much as it did from the work. It is a stand-alone story, it has a beginning, middle and end, which I felt worked. But nonetheless so many mistakes and issues hurt what otherwise was a lovely story that I really wanted to be better than it was.

Really it is the best, by far, of the three works, but all of the spelling mistakes, grammar errors and most of all, Isabel’s nickname switching from Izzy to Issy just hurt what otherwise was a really lovely story. It’s a shame because the work really does deserve a better rating, but I can’t overlook all of the flaws.

A series of unevenly written works, one of which was so much better than the others. The author has written a series of similar works with other supernatural beings and I hope that they have improved their editing skills over time. If not, that’s the real shame here.