A Review of All This and Love by J. Libby

A Review of the Catalina, Queen of the Nightlings series by J. Lee Roberts 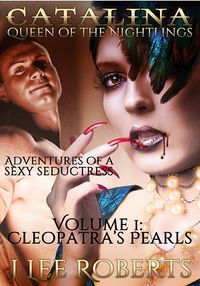 It isn’t often that there is a Succubus, or Succubus-like character that has a bit of an Raiders of the Lost Ark feel about them that mixed well with who they are. For the most part, stories about such characters tend to focus on the erotica and not leave much for telling of their history, who they are, and the world they live in.

It’s a rather difficult line to tread, to try to write an adventure that still has quite a lot of erotica in it as well. More so when the story is told over two works in a series and more still when, at times, the erotica runs roughshod over the story itself.

“I’m not your average monster. In the past, I have toppled, liberated, and even ruled kingdoms. Believe me, I’m over that lifestyle. My motto is, ‘Learn from the past; love in the present’.

“By day, I’m Catalina Purdy, proprietor of Purdy Antiques. By night, under cover of darkness, I expose my true nature.

“I enjoy; long walks on the beach, candlelit dinners, easy men, and feasting off the chemicals they produce when sexually aroused.

“I also love my job. I am eternally thirsty for the chance to hunt down rare, exotic pieces. However, I’m not hard to please, I’ll take any piece I can get, and I always get what I want.”

Catalina is a Succubus, but she is also an adventurer, a mystic, and, at least according to quite a number of beings in her world, also has quite the story to tell. Sometimes the story however is more about Catalina than she’d like it to be. But being a Succubus tends to bring you all kinds of attention.

Catalina is a mix of being vampiric, in that she feeds on the blood of others, but also she defines herself as a Succubus in that she can mesmerize others and have them do her bidding, not to mention that she really needs sex on an ongoing basis in her life. She is an interesting character in that her past, though shrouded in mystery, defines who she is to others but at the same time she tries very much not to allow it to define herself. There is a bit of an internal struggle at times over that conflict, mostly through her using her past to occasionally obtain something she wants.

Still, in the here and now, she is somewhat of an Indiana Jones sort of main character, tending towards a focus on adventure, but not at all shy about using her abilities at the most interesting times in the story. But that’s where the problem starts. There is a vast background about Catalina that is skimmed over, relationships mentioned, and so on, but really the work doesn’t delve into that part of her.

The work focuses on all of the sexual interruptions and moments that she encounters and when they come to pass in the work, they take up quite a lot of the work as a whole. There’s many sex scenes which are, to be clear, very hot, very well written, and as a whole I thought they were quite good. But this alone cannot hold the work together and so the story falls back on the introduction of a number of characters connected to Catalina, When it does so, those moments aren’t long enough to give a lot of character development or direction to them. There’s a lot of suggestions, some quite lewd, and it adds flavour to the work. It’s just not interesting enough.

While the writing is very good and there aren’t many editing problems, save for a few minor ones that cropped up here and there, good writing couldn’t make me like this work as much as I wanted to from the start.

A bit too much erotica and not nearly enough story for my personal taste. That’s a shame because Catalina is interesting outside of the erotica by far. 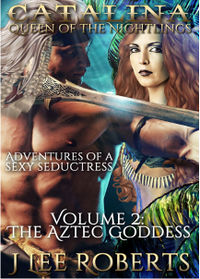 Catalina, Queen of the Nightlings: The Aztec Goddess by J. Lee Roberts

The other work in the series managed, I thought, to find that balance better as a whole and in doing so created a much more interesting and complex story than the first work did. It also gave a better glimpse into Catalina herself, her past, and some of the important people in her life, human and otherwise.

Sometimes your past confronts you in ways you never expected. When that moment arrives, the question one needs to ask is… why? The answer to that can, in many ways, reveal more about yourself than the person that asked the question in the first place.

Witches, shifters, and shamans. Oh my… Catalina is at it again, and as always, no one is off limits. Strong, smart, and sexy, the Queen of the Nightlings is all but invincible. All except for one little weakness—twins.

Deep in the heart of the jungle an ancient power calls. As Catalina searches for its source, she discovers a lost Viking warrior washed ashore after a sudden squall. Although she is forced to abandon her prey, Catalina knows she will never get over the mysterious stud without at least one little taste. Trouble is—while the Cat was out to play, tall, blond and handsome has gotten away.

The journey is only beginning when she finds her prize has been captured by a crafty coven. Catalina may be a monster, but what the witches have in store for the warrior is downright evil.

Catalina receives a visit from a new client that wishes to have her find a particular statue. The problem is that Catalina knows, exactly, where that statue is and what it can do. A long time ago, she came into contact with it and her life took some unexpected turns. So did a lot of others that still haunt her to this day.

The really interesting thing about this work is how much of the work tells of an important moment in Catalina’s past, what it meant for her future then and her present now. It also links into the previous work and explains quite a lot about Catalina and how she came to be where she is. It’s also interesting to see the one human in her life, a human that isn’t affected by Catalina’s powers and the dynamic that exists between them.

It’s through that relationship that most of this story is told, through Catalina telling of her first encounter with the statue in the past. It is told in Catalina’s voice as she is telling it as a story and it’s more personal that way. The story doesn’t read as a flashback so much as a somewhat fond memory. I though that work well, told more about Catalina’s personality and in doing so, more was learned about her.

The erotica in this work is spread throughout and as such it isn’t so overwhelming as it was in the first work. It’s less “happenstance” and fit better in the story overall which made the story a better read. This work is quite a bit longer than the first one because of all of the story, background and world building that is mixed in. There’s a better balance of story to erotica and it makes Catalina more interesting, a more full character and held me in the story much better.

There are still a few minor editing mistakes in the work, but they are minor ones, mostly a similar sounding word being wrongly used. Otherwise the writing is much better, the characters grow in the story, and there is a nice direction that it takes which kept my interest and I liked that.

By far the better of the two stories and I think that really this work needed to be the first one in the series, though it isn’t. It’s a fuller, more involved story and as such it’s better written, makes better use of the erotica and has a better balance as a read.

I’d like to see a third work sometime, there are still a lot of stories to tell that have been hinted at and perhaps time will make them appear.