A Review of The Second Circle by N. T. Gore

Succubi Image of the Week 376

This costume is missing something and will never find it 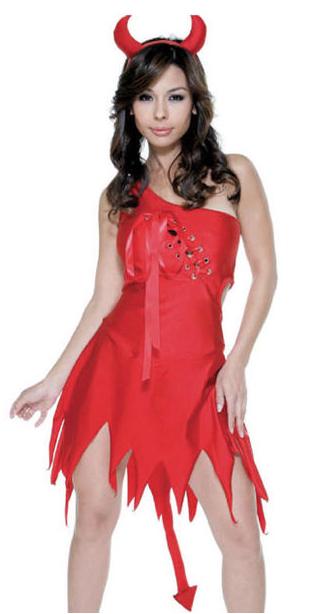 There are lots of costumes that I have looked at that are missing something… Some more than others, but it is, as I’ve seen, a theme… Here’s another example of that…

This is called the Sexy Red Devil Costume and it comes with the dress, the horns and the tail. It sells for $56 with only $25 charged for shipping and handling at one of the places I found this.

It’s just… well tacky is probably giving it a compliment, but that is about the best description of this that I can think of. The horns are lousy, the tail looks like an afterthought and the dress itself, especially that glitter bow are too ugly for words.

I can do a lot better with a red strapless dress, a pair of horns and a tail than this and I won’t feel half as silly… Well, actually not at all as silly as I would in wearing this disaster.

I can’t see a way to save this, nor really would I want to try as it would make more sense to put the time into something a lot better than this.

As well, I think that charging almost as much in shipping as the costume itself is a bit on the tacky side as well.

I’m not even sure why this exists to be honest…