A Review of Hard-Boiled Immortal by Gene Doucette

A Review of Mallory of Strange Valley by Kassandra Coley 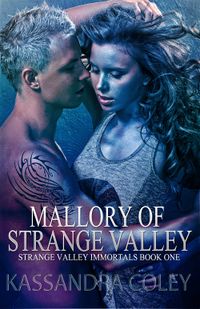 To me the worst thing that happens is when an author begins a series with much promise, with a story that is captivating with characters that are truly endearing and then… nothing more happens.

It’s a wonderful thing to read a work that sets up an amazing premise, lays out the path for the series to take going forwards and ends on a note that makes one want to see where things go from there.

It’s a very sad thing when the work vanishes soon after it is released and the author vanishes as well leaving only the promise of what could have been… and still hopes to be.

Mallory attends community college, listens to oldies and Motown, and creates collages from mid-century magazines. Oh, and also? She’s a sex demon – a succubus – who preys on the sexual appetites of her male classmates to survive. There are plenty of perks to being a succubus – smoking hot body, lots of explosive sex, the ability to glamour mortals – but what she really wants is to remember when she turned Immortal, who turned her, and most importantly, why.

Mallory stays out of the Immortal political clashes and power struggles that have been playing out for centuries. The conflicts are all about the Immortal pecking order, where Angels grace the top and sex demons are relegated to the lower ranks. Throughout history, the Immortal conflicts have amounted to little more than posturing between the species. But things are taking a dangerous turn. Succubi and incubi are being extinguished, and the danger is growing closer to Strange Valley.

Meanwhile, Mallory is trying to contend with Asher, an Adonis of an incubus who’s inexplicably moved into her territory and now competes with her for prey. There’s more to Asher than he’s telling, but it’s worse than a few secrets. Much worse. Mallory is deeply, irresistibly drawn to him. But coupling between sex demons is deadly dangerous. She’s convinced they’ve crossed paths before, but she has too many gaps in her memory. Asher may hold the key to Mallory’s past . . . and Mallory’s past may be the key to the lethal wave sweeping the Immortal world.

Mallory is a Succubus with a list of problems the length of her tail. Her best friend is so much more hypersexual that it makes Mallory look like a prude. An incubus has appeared in her world that she can’t get out of her mind, and wants him in other ways that could be bad. Very bad. There’s someone out there killing Succubi and Incubi, and they seem to be getting closer. Worst of all, she’s starting all over again with a new identity in her hunting grounds… and she’s bored of the whole thing.

Mallory is an interesting Succubus. She does have wings and most of the usual Succubus appearance, but doesn’t display them too often. She shapeshifts, but only when she needs to change identities, not for the sake of those she feeds upon. She uses some rather interesting means to get the attention of the men around her, a bit of mind control coupled with a look, a bit of bare skin… and the ability to “play” with them from across the room.

Tied into the superficial comes her personality, which I adored in that she isn’t a wall flower, she has her own firm ideas about what’s right and wrong, and she is intent on keeping things that way. The scenes with Mallory making her way through a world of hyperactively sexual college students is actually quite amusing at times and is a good foil from the more serious and darker aspects of the work.

Mallory finds herself coming into contact with Asher, an Incubus that received permission to be on Mallory’s territory. At first, he is brash, over the top defensive, and does quite a lot to get on Mallory’s bad side. As the story continues, that attitude changes, softens, and there is an obvious connection between these two characters that starts to emerge. But all of that is cloaked in mystery, questions, and really the explanation isn’t said, but inferred.

The attraction between Mallory and Asher is a real problem in their world because… it simply isn’t allowed. The thing about that is… no one really can say why that is. It’s an obvious means to connect Mallory’s past, which she is trying to figure out, and who Asher is… and Mallory for that matter. With all of that confusion between the two, there are moments when the veil of forgotten memories is almost, but not quite parted.

The mysteries are thick in this work, and they tend to pile up over the course of the story, but this was supposed to be the first work in a series and as such, this needs to happen. In something a little less than fifty pages the plots are drawn up, the characters defined and the direction of the series as a whole is made quite clear.

There are some lovely scenes of Mallory as a Succubus using her powers to control others, or at least influence them to some extent. When she goes to feed on those she is interested in, that mind control turns very hot and erotic and as a whole the heat is there, the story is there, and it made me like Mallory even more because of what she does reflects on who she is. She isn’t a killer, she doesn’t want to hurt others, and she does her best to make them happy. Doing so is a small measure of happiness for her as well.

The work is simply written well with excellent characters, themes and heat that made this a delicious read. But with all of that good comes one sad truth. There is no second work to this series. There are no answers to the questions posed, there is no resolution to the plots opened. There’s a expressive buildup to a cliffhanger and then… we are left wanting for something that never appeared.

It’s a real shame that this work is no longer available, that there will, it seems, never be a continuation, the answers Mallory is looking for never to be revealed. I have a fairly good idea of what the answers are in a roundabout way, but whether I am right or wrong seems to be something that will never be told.

And that really shouldn’t be.