A Review of Mallory of Strange Valley by Kassandra Coley

A Review of Hard-Boiled Immortal by Gene Doucette 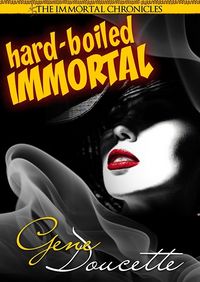 I have been reading of late quite a few works about Succubi that are set in a sort of “film noir” setting. Sometimes that setting doesn’t work well because the author can’t get the personalities right, or the setting is wrong. Sometimes it’s a problem with having today’s language seep into the story and that breaks the spell of the work.

However. When an author can write well in this genre, writes amazing characters and tells a gripping story in which you aren’t quite sure what’s coming next… That I really enjoy reading. Add in a Succubus that I think is wonderfully alluring and intelligent and that’s something I adore beyond words…

The year was 1942, there was a war on, and Adam was having a lot of trouble avoiding the attention of some important people. The kind of people with guns, and ways to make a fella disappear. He was caught somewhere between the mob and the government, and the only way out involved a red-haired dame he was pretty sure he couldn’t trust.

Adam is an immortal, having seen the world for longer than he’d care to remember. It’s World War II and he’s tending bar in Chicago and meeting some interesting people. The problem with that is those people are interesting to other people and Adam is getting their interest as well. A Succubus walks into the bar, and it isn’t the start of a joke… It’s deadly serious.

One in a series called The Immortal Chronicles, this work is a perfectly written story that enters a dark and smokey bar where some good and not so good characters gather to drink, tell stories, and muse over their drinks. Adam, the main character, has a stellar personality, one that takes hold of the story from the first moment and doesn’t let go of it till the very last page. He’s intelligent, witty, tactful, but most of all, there’s a magnetism around him that draws the story and surrounding characters to him and that allows for some amazing plot and story to be told.

The work reads like a mix of mystery, detective, and supernatural with a bit of humour tossed in at the right moments to break the tension when it needs to be. Really one of the very best in this style of writing that I have read in quite some times and I couldn’t stop turning the pages to see what came next.

When Lucy, the Succubus of the work, appears, she has that certain look, character and drive that tells that she is a Succubus, but not in a simply sexual way. She’s a lot more complex than that, having her own story to tell, but also slipping herself into Adam’s world for her own reasons. As the story unfolds it’s never quite clear who’s side she is on, what she intends to do, or if Adam can trust her until the climax of the work arrives. She doesn’t appear in the work as a sex object, she’s so much more than that in all she is and discovering that along with Adam is amazing when it occurs.

The story is very much one where the reader needs to pay attention to what’s going on, to follow the stories being told, red herrings and otherwise, and when the payoff comes for paying attention to the story, that’s very satisfying. The work is solidly written and while it is just one part of a series, it can be read as a stand alone work and the effect is the same. Everything you need to know about the characters comes in the story, doesn’t feel like an info dump and holds together extremely well.

The work ends, naturally, in a way that tells of something to come, and considering this work is part of a series that’s expected. In spite of this, most of the loose ends are tied up, save for Lucy and one other character. while Adam mulls over the events of the story.

The only thing that I would have liked it to know more about Lucy than was told. There are some good hints about her, some thought towards her background, but that remains mostly shrouded away in the mists of the story as it wasn’t critical. But leaving so many questions about her and not answering them, or at least spending a bit more time in the aftermath to find out about her was a little bit disappointing.

An amazing work, a telling story, strong characters and more. One of the best reads in this genre that I have seen and well enjoyed…