These are rather expensive hooves…

A Review of Demon Seed by Madelene Martin 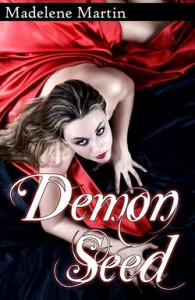 An Incubus story this week for a review and it is one of the better works that I have read this year. Most of the time the story lacks for the erotica when it comes to Incubus stories. It always seems that the writers want to just get to the submission and the climax of the moment leaving any kind of real story in the dust. Thankfully this author didn’t go in that direction…

Melinda is stuck in a months-long dry spell after leaving her boyfriend. At night she dreams about a dark, preternaturally sexy stranger with glowing eyes.

As her dreams grow more intense and sexy she finds her cravings begin to take over her life. But nothing will make them go away – except Him.

Every night he visits her in her dreams.

Her dream stranger finally reveals his purpose with her – he wants to impregnate her, and he intends to make her beg for it. Mel is powerless to resist. But now she knows: She’s not dreaming – and he’s not human.

Melinda, better known as Mel, is trying to live though the mundane problems that come her way and at the same time get past a boyfriend that did her no good. This has, of course, coloured her view of men in general and that means she’d rather be at home than out in the world.

The thing is, when you are alone, and you are wanting, that’s when sometimes, just sometimes, an Incubus will hear you and come to visit. After that happens, then things become complicated. The dream world he brings becomes more real and then things come from there.

The way in which Melinda’s dreams go from fantasies to the world of the Incubus is subtle and really is so gently created that the tipping point is easy to overlook. The fantasies woven around Melinda are deliciously seductive and tempting in all the right places. Melinda’s decent into the Incubus’ hands is done in a way that gives them both what they want in the end and that I enjoyed.

Issir is the Incubus in this story and there are only hints of his having the wings of an Incubus and nothing more than that through the story. Of course his ability to tempt Melinda, play her body and make her want to succumb to him are all the marks of an Incubus. He’s sex personified, but also more than that. There is a hint of caring, of desiring, of wanting to be. That makes this story special and one that I really enjoyed.

The heat is wonderful, the story is captivating, and holds you throughout the work. My only wish is that it would have been a longer story and that more about Issir was told. Perhaps there will be more sometime, after all, Mel knows his name now and names are power after all…