A Review of Undercover Unicorn by Terry O’Brien

These are rather expensive hooves…

A Review of Sin Incarnate by T. C. Archer 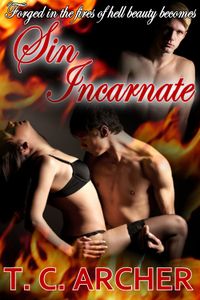 One of the things that, to my regret, comes to be a part of many characters that are Succubi, or appear to be Succubi-like, is that they are transformed because of anger, then are played with, physically and emotionally by the one that transforms them.

They are made to seek a path, all odds against them to succeed and be free. But in spite of this, sometimes what seems to be their fate can be changed by one simple word.

Forged in the fires of hell beauty becomes sin incarnate.

Something malevolent grows in Lorna. When she conjures a dark lord and begs for irresistible beauty, he makes one demand; serve him as an underworld female who tests mortal men. Now, a millennia later, this is her last chance to find a man who can free her. But Lorna must learn to love if she’s to save herself. Yet that won’t save the two men who shared her body. One of them must be sacrificed.

Lorna makes a deal with a dark lord to be everything that any man could want. The price is that she will serve him… eventually. That time is nigh, and she has one last chance to find love to save herself. And in two men, that might just come to be.

Lorna, at the beginning of the story, does not quite understand what she is asking for and when she gets it, her wish is turned against her in a way that means she’s on a one way path to disaster. While she is not described as a Succubus in the work, it’s fairly certain that she is, in some ways, one. While she seems to be completely human, and there is no evidence of her having horns or a tail or anything similar, she does have a presence, a beauty in her that tests men and in that comes their downfall. It is a similar story to that of the stereotypical Succubus in that she “takes” those that only want her for one night and nothing more to “hell.”

But she does have a scrap of her humanity in her, it does come out as the story unfolds, and she, as a character is better off for that happening. When she finds in Jace the truth, that one thing that she has been searching for, that’s an amazing moment in the story. But there is a complication, and that’s Ryan. While Jace is the answer, Ryan has complicated things and with that, at the pivotal moment in the work, another truth is revealed and in that moment Lorna changes, becomes true to herself and that was a wonderful thing to see happen.

Before all of this, of course, comes some lovely story telling, a sizzlingly hot series of erotica, but in that, more importantly, comes not simply sex, but emotion, caring, and some very clear evidence that some things are worth waiting for. Even centuries.

The only real issue I have with this work is that it ends on a sort of cliff hanger which begs the question about what happens to these three in the aftermath of their choices. After all of the buildup, the story, the emotional connections… It sort of grinds to a halt a little too late I felt. The author I think would have been better served to end the work about two pages earlier when the story would have ended on a point where things came together. As it ends now, there’s… something off about it. Like it was tacked on at the last moment and it feels wrong.

Lovely, sensual story once the setting up of the story is done. Passionate characters, well told, and that always makes for a better story. It’s a shame where it ends, an open door to another story which never has appeared and it seems like it shouldn’t have ended there. It would have been nice to see the mornings after to come for Lorna instead or drop that ending for the one that really matters here.