A Review of Invisible Demons in the Bedroom by Lacey Filmoure

The Fence by TeraS

A Review of Wild West Succubus by Lila Shaw 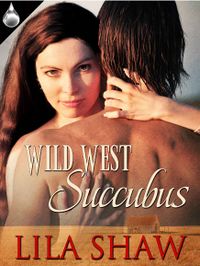 The next in a series of four reviews of works by the author Lila Shaw today on the Tale and one that, for me, took Succubi into a time that really hasn’t been written about very much and I thought was very interesting and well done…

None of the Succubi have simple lives. The questions of  who they are, why they came to be are core to them. But there is more than that. There is the certainty of… knowing. That one moment in their lives when they made a choice, for right or wrong, and the things that they did, or didn’t do as a result. The assumption that some make, that being a Succubus makes one less… is an assumption that never is correct.

They are, always, more.

The West has never been so wild! A determined gargoyle is on the hunt, but he didn’t count on falling for the beautiful succubus he was sent to destroy. She’ll never be tamed or broken, but can she be saved?

A woman damned … Priscilla Goodnight, a widow in the harsh Kansas frontier, has a cattle ranch to run. She can’t afford to reveal any cracks in her tough exterior or indulge in sexual liaisons with her ranch hands. But a hungry succubus can only exercise so much self-restraint, making discretion, disguise, and memory-wiping her top managerial skills.

The mysterious stranger who knows her darkest secret … Priscilla doesn’t remember hiring the man with the wily smile and the flannel voice. At all. Men as physically appealing as Hugo Desmond rarely escape her bed, let alone her memory. And how is he able to move so fast, yet nobody notices but her?

Is she his target, his mission, or his bait? Hugo is a gargoyle—a specially-trained executioner—sent to purge the west of evil. With succubi falling squarely in demon territory, Priscilla has every reason to fear him … yet she can’t stay away. Hugo says he needs her help and wants to save her soul. But is redemption possible for a woman as wicked as Priscilla, or will love thaw her heart just enough for Hugo to crush it?

Priscilla is not what you might expect her to be. She isn’t like most Succubi in her world, having loved and lost changes a person and it changed Priscilla. It changed her more when she lost again. She has her needs, but she has found a way to manage them and in doing so has found a measure of piece in a world that has taken much of that from her in the cruelest of ways. Then Hugo arrives and she is confronted with someone that knows who she is, what she is… and could kill her quite easily. He frustrates her, she captivates him, but there is that one word that keeps cropping up between them. Demon. She’s one. He’s hunting them.

I don’t tend to enjoy Western books very much. Mainly because, for the most part, the women that appear have no will, are frail things, and seem to have no mind of their own. Priscilla is the complete opposite of that and more to the point, her own nature is what helped to drive her towards the place she finds herself, the things she does, and more importantly, the things she refuses to do. There’s a really wonderfully told inner conflict within herself at times that takes her towards the edge often, but she strives very much to overcome that. It is that struggle within herself, but more, the struggle to be the one in control, to manage those around her, and to keep a firm grip on her world that adds tension to the work.

Priscilla is a Succubus of course, but horns or a tail are never seen, thought she can take souls, feel on others, and has a bit of mind control ability as well. She also can shape shift, though that is only mentioned fleetingly at as an aside. It’s interesting to hear Priscilla’s thoughts about what she is, who she sees herself, and those around her through the eyes of a Succubus.

When Hugo appears, at first it’s hard to say whether one is supposed to like him or be frustrated by him. Considering that Priscilla feels the same way for quite some time, I think that use of his personality worked well and set up the cascading events that come after they come to terms with each other. There are some points about Hugo that bother me, right to the end of the work, but those are mainly to do with a “power” he has, and, at least to my thoughts, the way he uses it which doesn’t seem to make a lot of sense at times. There’s a bit of a cold calculating personality in him which, thankfully, gets tempered by Priscilla as the story goes on. The same can be said about Hugo and what he does to Priscilla. She isn’t the same person at the end of the work as she was in the beginning.

And that, more than anything, is what drives the story forwards. Priscilla learns things about herself, about the world around her, that change her and in ways that she never would have expected. There is a connection between herself and Hugo, but there are always shadows around them both which serve to keep them at bay and at the same time draw them towards each other. It is a complex relationship and, as a whole, I liked that because it made both of them much more real and interesting than if Priscilla had been stereotypically driven by sex or Hugo had been single minded.

There are several twists in the work, some of which are completely unexpected, one that was a bit telegraphed, though not too much so, and then there is the dedication to the work, which tells of something that happens, something that tears Priscilla apart. The latter kept me waiting for the shoe to drop on that moment and when it came, even knowing it had to at some point… I think knowing made that scene so much more emotional than it was.

The climax of the work brings Priscilla full circle and the events that unfold in that scene had me wishing for one thing which never happened. It has to do with the concept of being forgiven for one’s sins. I wished that Priscilla had done the one thing she was told never to do, to gain the one thing she wanted more than anything else by her own hand. I think, overall and considering her story, that would have been a most satisfying moment for me at least. But the moment comes, it ends in a good and properly satisfying way for how the story played out, and in that, most importantly, Priscilla gets something she’s always wanted.

There are several short scenes of erotica in the work that fit into the story quite well. I didn’t feel as if they were out of place, forced, or didn’t fit with Priscilla’s character. They neatly divided the story in places, taking the story in a new direction as they did and I felt the heat and passion in them was really well done.

The work, as I have said, is really well written and kept me turning the pages to see what happened next. I did catch one minor mistake, though it’s own that my own interests about Succubi made me pause upon. That being at one point “tale” was used in place of “tail”, which is a minor nit I will admit, but it tripped me up for a moment. The thing that I found more bothersome was that in this work, as in Succubus Steam, Lilith is mentioned, her wisdom is given in passing… and she isn’t heard from again. That bothers me for the simple reason that she is such a central character to Succubi that teasing her and nothing else is disappointing. She is mentioned again in passing during a discussion of where Succubi came from, but that wasn’t enough for me… I wanted to see more of her. Regardless of that want, to make me like and enjoy a story set in the Old West is an accomplishment and one that was richly enjoyed…

Really one of the very best works that this author has written by far. So much emotion, strength, and story in this work that I felt did the characters justice. Some wonderful twists in the work, some real tragedies, but always, and most importantly, the story remained true to itself, its purpose and more.

The only thing I wish is that all of the teasing glimpses of Lilith that have appeared from time to time in this author’s work would come together in a story about her… That, more than anything, is something I’d like to see play out… I think it would be amazing…