A Review of Wild West Succubus by Lila Shaw

A Review of Invisible Demons in the Bedroom by Lacey Filmoure 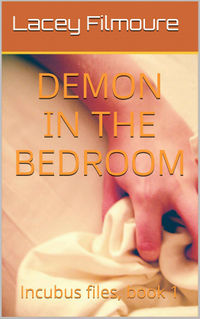 Invisible Demons in the Bedroom by Lacey Filmoure

There are certain themes in erotica that I personally do not enjoy. One of those is when there is pain or suffering. More so where the moment… or moments… isn’t so much passion and pleasure as it is simply one being using another for some purpose.

It can turn what was a story that could be interesting into something that just makes me sigh and lose my interest very quickly… and it shouldn’t. I know that there are not always happy endings, nor are all characters in a story good or evil. They are what they are. Still… raw sex isn’t enough for me at least…

Office Girl Tammy hasn’t been sleeping well at all. Just out of a long term relationship, and on the verge of a promotion, she’s too stressed to sleep well. So when she starts having weird dreams she can’t quiet remember, but wakes up with wet panties, she shrugs it off. It’s when she wakes up unable to move, and feeling the presense of something else in her room, that she starts to worry.

When a coworker warns her it might be something supernatural, she laughs it off. Things that go bump in the night are only stories to scare children, right? And besides, the incubus and succubus were myths made up to explain away wet dreams and help the sex-starved deal with the libido.

After being warned not to encourage the entity, Tammy can’t help but think about what if it were real. Soon, she learns the boogyman isn’t the only thing to bump in the night.

An invisible force takes advantage of her motionless state, relentlessly abusing and using her body for pleasure, and giving her more than she can ever imagine. Unable to resist, Tammy is just along for the ride, and questions if she really wants to resist, after all.

Tammy experiences what she believes is night paralysis, but as the story progresses the truth is something quite different. This in itself is a good beginning to a story but where it breaks down for me is what happened when the true source of her nightmares is revealed.

It is, for all intents and purposes, an Incubus. All of the classical signs are there and for what happens it makes sense in the story itself. The lead up to the moment when she sees the Incubus, experiences its powers, and what it does to her, is a mix of the banal and the unexplainable.

I found it somewhat difficult to become interested in Tammy herself, mostly because of the office scenes that transpired and those in that office that were not interesting at all honestly. Once past that point, there was lots of questions that I had and I wanted to have answers for.

Instead what comes is a rather violent and, in some ways brutal piece of erotica that I just could not enjoy to any real extent and that was disappointing. After all of the lead up I was thinking there would be something more than Tammy being used and then waking up to realize that it was all real.

The Incubus itself was more of a monster than a real character. The only purpose it had was to have its way with Tammy and then depart again. In that it was very stereotypical and I just didn’t feel any heat from the erotica here.

If you enjoy harder sex, then this work will appeal I would think. But for me I just didn’t see the heat in the story. It’s a shame because the build up really set a stage that I was expecting more than happened… Perhaps in the next work there will be… I’m just not sure it will be something that I will enjoy…