Succubi Image of the Week 373

A Review of Demons in Didsbury by Mary Tales

A Review of Succubus Steam by Lila Shaw 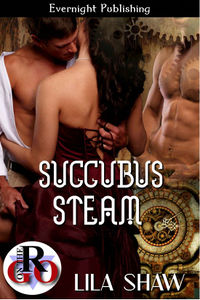 The second in a series of reviews of the works by Lila Shaw today on the Tale. I’ve always had problems with works set in the Victoria age, mainly because trying to accept “the place” that women are given there from the perspective of the here and now is a difficult thing for me. There are some works however, that manage to overcome my hesitation with the right story, characters and more.

Mix into that a good dash of steampunk, a mystery to be solved, and the question of one’s heart to be confronted and the story is captivating…

A succubus half-breed, such as Violet, who hobnobs with the highest echelons of Victorian London society, is a bride in a difficult marriage of extremes. Any act that wants of propriety, and she would find herself banished to the wilds of Cornwall where her full-blooded succubus sisters live and thrive. Yet she prefers the company of mortals, even if she must occasionally risk her reputation by engaging in discreet sexual liaisons.

When Violet’s great uncle dies and bequeaths her his laboratory and home, she crafts an artificially intelligent automaton named Adam to sate her carnal needs. Her plan is coming along nicely until an incubus from her past, and the unwitting model for her invention, discovers her secret. Violet has good reason to be wary of losing her heart to Lyle, but perhaps Adam is the key to fulfilling all of her desires.

Violet is not, at all, like her Succubus sisters. While they focus on the body, Violet is as forced on the mind as well. A tinkerer at heart, given the gift of a laboratory, she creates that which she cannot have to fulfill her own needs. But when the Incubus that she cannot forgive, or forget, reappears, Violet’s secrets, and those of Lyle, come to the fore.

Violet is one of the most unique Succubi that I have read about in a very long time. Most Succubi have, as their main focus, their need to be with others, to sate their needs and as such, they tend to be involved in some way with something sexual. Violet however has a mind. In the work she inhabits, having a mind, a will, a desire to learn and discover is not something expected of a woman, even more so a Succubus. It’s simply thrilling to see Violet in her element, creating with her mind and hands, and in that comes some amazing moments when her personality and drive shine.

In contrast, Morganna and Demelza, Violet’s half Succubus sisters, are the images of what one might expect “ladies of the night” in the Victorian steampunk age to be. They care mainly about sex, money, and, to a very large extent, gossip. This, of course, rubs Violet completely wrong and as such the interaction between these two extremes is at times hilariously funny and quite sad as well. It’s a shame that Violet’s sisters could not see their way to being more, but then, sometimes, one’s place is what one makes it to be.

Violet’s passion, her light in her life, is her clockwork creation Adam, who, though an robot, isn’t quite one. There’s a solid personality there and at several points in the story, happens to say or do something that brings out just how special he is… and he is a he, not an it by any means.

Lyle, the Incubus of the story, begins as someone that Violet dislikes, but also cannot forget. In that, the same can be said how one approaches his appearances in the work. He starts as being rather grating, but as the story progresses, that initial view don’t stand up to the events that unfold. When Violet, Lyle and Adam all meet, there is a moment where they all have to come to terms with a simple revelation. It is shattering for both Violet and Lyle in the moment, but then when who Lyle is, what his passions are, and how that all connects to Violet, the preceding chapters, and the events therein, are revealed in a different light and I liked that a lot.

The creation of this universe gives several references, for example Lilith, that are teased but not taken further because they are not core to the story. As well, a suggestion by Lyle at the end of the work leaves me wondering about where these characters would go after the work ended. I really would have loved to see that. While the work isn’t short by any means, being a complete story on its own, the references, the comments about other things in this world, the idea put to Violet by Lyle… These are things that would be a series on their own. Perhaps someday they will be revisited… I’d love to see that.

A Succubus that is not, at all, like anyone expects, one that has a mind, a will, and more than anything else, knows that she can be more than believed. Lovely heat, characters that are strong, passionate, and intriguing. A unique story in a unique world that I would have loved to seen explored again.