A Review of Succubus Steam by Lila Shaw

A Review of Demons in Didsbury by Mary Tales 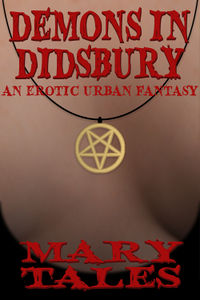 Demons in Didsbury by Mary Tales

A review of a short work of erotica that has a minor appearance of an Incubus in it. Magic is an interesting thing when you think about it. It has rules and with those rules comes specific needs for it to work.

Sex magic, at least in this work, is the core of all magic and that leads to some very interesting characters and situations, both good and bad.

The problem comes when the erotica overpowers the story…

Magic is real, but it’s not quite what you think. As energy seeps through from other worlds, adepts can harness it and direct it, for good or bad. If you’re in tune with the energy then there’s no better way to build up your reserves than sex.

Two stories from the world of The Witch in the Walls-

Demons In Didsbury – Adam was having a great weekend, until his girlfriend told him she was a witch and he met the ghost who shares her house. His world’s been turned upside down, and to make it worse, someone has conjured up a pack of demons that think he looks rather tasty.

Lilly’s First Lesson – Nervous trainee witch Lilly is having her first lesson in the use of magic, and her tutors have some odd ways of making her feel at ease.

Adam loves his girlfriend Rose dearly, of that there is no doubt, but after they make love in her new home, a ghost appears, and he learns that Rose is a witch, the house is haunted… And both of them want him in every way imaginable.

There is a lot to like about this story and that is mainly in the characters themselves who have very strong voices and personalities that shine. There’s a lot to be told about them and that is, in a way, but the problem comes in that the erotica in the work is almost constant with not so much attention placed on making the story hold up the work.

While Rose is said to be a witch, and Adam is hers, and the other characters are witches as well, for all of the sex they have I wondered if the women in this work didn’t have some part of them that was Succubus in nature for how often, and how over the top, their sexual encounters where.

They do encounter some threats, demons of a sort attack Adam at one point. There is also a very short appearance of an Incubus in this work which occurs in the first story. Really the appearance is mainly to draw Lily into the series and there isn’t really anything said or told about the Incubus of any real importance. The Incubus does have control over Lily, is having its way with her, and looks very much like a stereotypical Incubus save in skin colour. Beyond that, it is a “blink and you’ll miss it” sort of thing. As the Incubus isn’t a core character or really that vital to the work, that isn’t much of a surprise.

The work as a whole moves from hot flash to hot flash with only the occasional break for a little bit of story to be told before it moves onto the next moment of erotica. Most of the erotica is very hot and I liked much of it. The problem is that there is so much of it in the work that whatever heat was at the beginning gets muted by the end simply because of how often it happens.

An interesting start to what should have been a series, though as of this review there was no further stories told. More story would have been better and a little less erotica would have made things a lot better as a whole. But there is promise and that’s important.