A Review of Sexual Omens by Terrill Sarter, Jr.

A Review of Soul of the Succubus by Lila Shaw 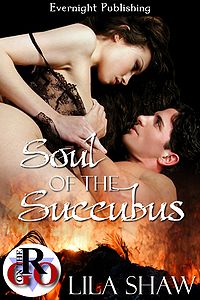 Soul of the Succubus by Lila Shaw

The first work asks an important question. What secrets are held around you that you never see and when you see them, do you believe in them, push them aside, or trust in them? And if you can trust, who do you put your trust in?

After nearly four millenia, Yve, a succubus and harvester of souls, has finally met her quota. She must travel to hell to redeem her own from the devil who holds it in hock. Ta’avah, the hunky and charming minion responsible for luring Yve into sexual slavery, joins her for her redemption ceremony before an audience of ogling demons. The pair soon learn that deals with the devil are rarely settled to anyone’s satisfaction other than Lucifer’s. Only one weapon can trump those of the master of deception, but do Yve or Ta have enough humanity left in them to find and wield it?

Yve, after so so long, has her “get out of hell” card and she’s more than willing to use it. The problem is that, like all deals, there’s one more thing that she needs to do, whether she likes it or not. Ta, the one that made her a Succubus, is involved in that task, but when it’s over, Yve finds that Ta has a few more secrets to reveal.

Yve is, as a whole, jaded and worn out after being a Succubus for so long, being seen as the lowest of the low by those she has faced for so long. From the first moment she speaks in the story, it’s clear that she would be just as happy for her existence to come to an end as she would be in being no longer a Succubus. Being used for the countless time that she has been, has marked her spirit deeply and it shows.

The story of Yve and Ta, how they are connected, how the truth finally comes out between them both, that’s a wonderful story in itself and adds so much to the characters in this work by far. There is a lot of history hinted at, much in the way of the past and what happened, but it isn’t really gotten into save for in passing. The same is true of the ending in which the story offers a hint of what is to be, but we only get the barest taste of what that is.

But in-between, there’s a connection made, one in which the truth, in a lot of ways, can set them both free. It’s that connection, the revelation that sometimes what is obviously there in front of you  isn’t everything you think it is, that brings Yve pause. In the same way Ta finds that some things are worth giving up for the right reasons. In doing this, in finding that truth out, they both become much more alive in who they are and that makes the difference.

Lovely writing, characters that are true to themselves, and a story that has some well thought out twists and turns. I just wish the ending was longer than it is, that we saw “heaven on a bun” and the moments that come for them both.

I wish there had been an “after” told about these characters. Perhaps not a complete one, but at least something that brought some closure to the two of them and some of the dangling plots that were unresolved…