A Review of Enslave by Felicity Heaton

A Review of The Succubus’ Sub – Session Twelve: A Day in Pink by John Dylena 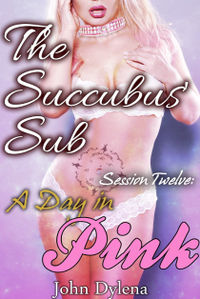 The Succubus’ Sub – Session Twelve: A Day in Pink by John Dylena

The twelfth work in the Succubus’ Sub series by John Dylena was released this week. I have always loved this series, and in this work things take a very interesting turn for Brett. The author wrote a short little bit of flash fiction about Brett, or rather his alter ego Brooke quite some time ago, which I thought was an inspired bit of writing about Brooke turning “all out bimbo.”

Seesion Twelve tells that story, and also serves as a warning to never play with things that a Succubus leaves laying about… You never know really what they might be capable of doing… or what you will be doing because of them.

When the succubus is away, the sub will play…

Myserra has had her hands full teaching Ashley, the new succubus, how to control her powers. Brett is used to being the center of attention, and in his loneliness, he’s begun to act out. But Myserra is unimpressed, and when she leaves him alone for a week in their condo, he’s devastated.

It seems that his mistress has left something behind, however: a sparkly bracelet covered in rhinestones. And no matter how hard Brett tries to avoid it, he can’t help but want to slide it over his wrist and give in to the power he knows lurks inside of it.

It isn’t long before he surrenders and discovers his inner bimbo in the process. Now he’s having the time of his life. But at what cost?

Brett’s relationship with Myserra has gone a little bit off the rails of late. Myserra is not spending as much time with Brett as she used to which Brett finds hard to take, at one point being rather short with Myserra and when she leaves him alone for some time, he finds that things just become worse. A mysterious bracelet catches his attention and Brett discovers that when a Succubus leaves something out in the open, it can change things in ways one would never expect.

Myserra and Ashley do not appear for very long in this work, as it is really focused on Brett alone. It is clear that Myserra has something in mind for Brett, the comment she makes at the beginning of the story makes that very clear, and the means to make that happen is both cute and wonderfully told. They do, of course, appear by the end of the story again, to make sure that Brett, or rather Brooke, gets everything out of her lesson, and the twist in the ending is a neat little one that I didn’t see coming earlier in the work.

Brett’s transformation into “Bimbo Brooke” is told in a way that makes it very subtle and by the time that Brett realizes that something is happening to him, it’s far too late to do anything about it. Not that he could at any rate as Myserra’s trap for her submissive works really quite well. The Brooke that has been seen before isn’t the Brooke that appears in this work. She’s very much a bimbo, but there is also something a bit different about her. She does try to fight her transformation, attempts to control herself as much as she can, but over time she falls further and further into Myserra’s trap. When it finally closes completely, Brooke is a cute little sex toy that has quite the experience with her Mistress and her new found friend in the story.

I liked the mental shifting of Brett to Brooke and then how Brooke turned the corner into being the best bimbo she could possibly be. The shifts in attitude and character build up slowly over time and to Brett and Brooke’s point of view, when they do shift, it’s fairly seamless and not noticed too much by him/herself.

There are two very hot scenes in the work, one that introduces a new character to the series which I thought was lovely, and the other when Myserra and Ashley return that takes Brooke into being completely bimbo in nature and finding out what that means in some very hot ways. Two really well told hot flashes, but the mind control and body transformations are really the core of the story and as such they make the work very strong as a whole.

The author knows his characters and how they act, what they do, and more importantly, how things come to the climax aren’t out of place. I would have liked to see a bit more of Bimbo Brett getting into some “situations”, more than she did. I think I would like to see her return again sometime, perhaps Brett will see this side of him/herself as being a treat in more ways than one.

Certainly Brett will have learned not to touch things that he doesn’t recognize. Succubi have all sorts of things to play with… or to play with others you know…

Just a wonderfully fun work that just made me smile throughout. It was wonderful to see Brett, through Brooke, be something different than she usually is. It gives a different perspective on things, what could have been, what might have been, and what could, possibly, return again some time. A lovely light, joyful, and cute story that I really did enjoy…