Some Video RPG Succubi are not what they could be

A Review of The Succubus’ Sub – Session Twelve: A Day in Pink by John Dylena

A Review of Enslave by Felicity Heaton 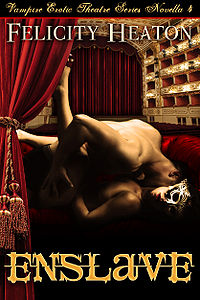 Sometimes the concepts of Succubi, and Incubi for that matter, get a little bit entwined with vampires. Sometimes that really doesn’t work, mainly because the two concepts really don’t work together well. However, if you take a slightly different view of both sides of things, you can, if you try, come up with an idea that makes sense, works well, and most importantly, helps to create a uniquely hot, passionate, and adventurous story.

What happens when what you are is hidden from you, then confronts you and then destroys what happiness you had. What is the result when your refusing that which you are for years on end, draws others to you who want you for their purposes and care nothing about you?

Who do you turn to and trust? And when you figure that out, is it too late already?

His determination to succeed in business has left no room in his life for love. Now, a beautiful and deadly succubus has teleported into his dark, decadent world and is in danger of enslaving his heart.

The moment their eyes meet, Varya knows she cannot have the exotic dark vampire who sets her pulse racing. His shadowed aura marks him as forbidden, but the hungers he awakens in her are too intense to resist—she must have a taste.

When an erotically-charged kiss ignites their soul-searing passion and reveals something dangerous about Andreu, will Varya leave forever or will she dare to risk all in pursuit of something she thought was beyond her reach?

Varya visits a theatre in which vampires perform some very kinky sexual acts and while she is there, trying to hide herself, her glamour slips and she is seen by Andreu, the vampire who doesn’t want to fall in love like his brother… But one look and he wants her. Varya has been told by her Fae clan that beings such as he are forbidden, but she can’t stay way either. A misguided trap later and Varya is imprisoned in the theatre… and then the truths begin to come out.

Varya is described as a Succubus, and another character is described as being half-incubus in nature. The interesting thing is that Incubi believe in love and Succubi have been told that they cannot love. Through the story, the real truths about Succubi come out and with that a really involved and passionate story unfolds.

While Varya is a Succubus, she does not have horns or a tail, though she has pointed ears, fangs, and she can teleport herself from place to place. She also has a touch of mind control abilities as well. Sadly, she also, if she is not careful, can and has taken the lives of others, but not their souls. I liked her style, what she wears, how headstrong and independent she is. All of that just added to her character in a lot of ways and when she was present, she took over the story from sheer force of will.

The supporting cast, all of them vampires, are interesting and complex in their own rights. Thankfully there wasn’t a lot of blood bring thrown around through the story, which is something I really dislike is any story about Succubi. Their lives and stories are really detailed and that helped to weave the story as a whole better.

The erotica mainly focuses on Varya and Andreu, and that passion, and the confusion it brings to each of them as the story unfolds is at times quite funny and at others so terribly sad. Varya’s teachings keep pulling at her, she cannot believe in what she has, and that hurts her. The same can be said about Andreu, what he is told wars against what he can see and it takes forever for him to make a choice. But when they both do, the story is so much better and a sweeter read. There are moments of conflict, sacrifice, and mistakes are made, but that makes their relationship all the better and realistic, and that adds to the heat of the story.

As much as I enjoyed the work, it was the ending that for me wrecked things. It felt wrong, it did not sit right, and in the end what happens seems like a cop out for a quick ending to the story. There’s so much that goes wrong from the first moment that Varya sees Andreu so much pain and suffering, so much heartache and more, and in the end, all of that ends with a decision that for both of these characters, isn’t right.

It also drives me to wonder what happens if the theatre was burned to the ground? What is the result of a disaster like that? There’s a lot of what ifs that came to me over the ending, and it feels like there needed to be a conclusion to this work. But I haven’t found that, and as such, to me, that means that Varya and Andreu are in a situation that cannot end well… and it shouldn’t.

Wonderful characters, the erotica, the descriptions of what Varya does and Andreu’s reactions and what he does to her are hot, passionate, and perfect in every way. The writing itself is strong, the settings and scenes are well written and more… It’s just the ending that disappoints me, and it shouldn’t have.

I’ll give this work four of five pitchforks.

A deeply involved story about a Succubus finding that she can love. Really beautiful and wonderful in many ways… But the ending left me wanting and after all that Varya suffered, that, at least to me, felt like a mistake.