Succubi Image of the Week 372

Some Video RPG Succubi are not what they could be

A Review of Black Shadow Detective Agency: The Angel and The Demon Caper by Sigurd Olson 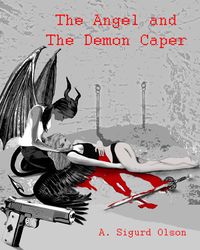 Black Shadow Detective Agency: The Angel and The Demon Caper by Sigurd Olson

Some think that Succubi are weak beings that do not, or can not, or will not, fight for something. The question isn’t one of something, but rather someone. There comes a point where a choice has to be made and like all beings, Succubi can choose. They can choose to know love, they can choose to be more than they are.

Most of all, they can decide that being more than “a simple” Succubus is what really matters to them. Having someone to love that sees you in the same way means that you’d do anything for them… and do.

The name of the door reads Black Shadow Detective Agency and the office is in a building so old that it considered a cultural landmark of the state. The room is clean the furniture isn’t new and when you walk in to the office it feels like you just stepped onto the set of The Maltese Falcon.

My name is Jason Black, I find things, people, and solve the occasional murder. I was given knowledge of both mortal and daemonic magicks from my parents and they are the tools of my trade. I have saved people from soul stealers, tracked kidnapped kids across the ocean with nothing more than a strand of hair, and interrogated the dead. For the right price and a worthy cause I’ll do anything to help a client get the justice that can’t be found from the normal sources.

My name is Jason Black and I’m for hire.

The weirdest case of my century long career has just landed in my lap. A succubus waitress from my favorite bar, The Mystic Wolf, has come to me begging for help. A valkyrie friend of hers has disappeared, and her place looks like a bomb went off inside it. Now I have to find an divine deamon for an infernal one. If it wasn’t for the fact that there was check with my name on it I would thing this whole thing was a sick joke.

I love complicated mysteries, especially ones that make you think and try to piece together the plots and plans that are swimming around. It’s even better when the characters have their history so neatly told that by the time you are halfway done you feel like you’ve known all of them for a long time before.

Being that this is the third work in this series, and I had not read the previous two works, it wasn’t hard to get into the story, the characters and this world. There is quite a lot of information needing to be shared of course, but it isn’t an info dump. The setting, characters and world are explained in an off handed way which works really well and provides for insight into the main character of the series Jason Black.

He is part demon in nature, but he isn’t demonic or evil. Far from that he’s intelligent, has a detailed past, and a very complicated present. That made him very attractive and in that his personality is sharply defined on the page. He strikes me as sort of Indiana Jones like in a way, fedora and all. His personality, humour, and more just made the story spin around him and in doing so the author created a gripping page turner.

Part of my joy in this work was the way Succubi were described. Having them be in a union at a club and read all of the little quirks and personalities they all have was wonderful. More so that the Succubi were not stereotypically evil or nasty. They are all trying to make it in a new world in their own ways and it was refreshing to see that. There were many moments where I laughed over some of the things they had to deal with and it was lovely…

That brings me to Sasha, the main Succubus of the story. She starts out confused, worried and most importantly in love. The question of who she is in love with starts the mystery and drives it forwards, but as that develops, Sasha grows in herself and what she can do. Love they say can change you. In Sasha’s case that’s so very clearly told. Sasha does have wings and a tail, as do all of the Succubi in this work. But she also isn’t really like any other Succubus in another way. She wants to be more than she is, going to college and studying to be a teacher. All of that made her adorable in so many ways and I love her dearly.

This is a mystery story, so there isn’t any erotica per se, but it was cute to see the little double entendres that appeared from time to time and how Jason bemoans the two women, both of which I thought were amazing characters in their own rights.

Tightly written, a world of detail, characters with style and purpose. All in all a wonderful read and well worth your time. My only wish? I would have liked to know more about Sasha, her story is a bit vague background wise. That and seeing more of the Succubi at the bar… There are so many characters there only touched on and they interested me a lot.

A wonderfully told story with a strong universe and characters that are unique, have their own souls and are not afraid to show them. Really one of the best works in the detective mystery/supernatural genre that i have seen this year.