A Review of Damned and Desired by Kathy Kulig

A Review of Incubus Stories: Werewolf Lust by Felicity Quill 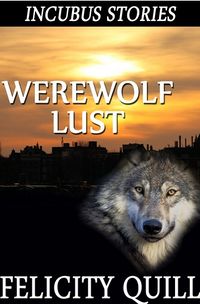 A review of a new Incubus series that recently started on Amazon today on the Tale. It’s never an easy thing to begin a series in a way that holds a reader’s attention, connects them with the characters, and, most importantly, keeps you involved with the story.

But that’s the thing in a lot of cases really. There is the hint of a story, the suggestion that the main character has a past, an interesting one, and bits of it are scattered throughout the work. But then the story turns into a hot flash that, when it’s over, just leaves something wanting…

Thane is a young incubus on the prowl for his next meal. His worries that he will have to settle for yet another unsatisfying encounter are blown away when he meets Brandon, a rugged man exuding the type of energy Thane finds irresistible.

Thane isn’t the only one with a secret, however— Brandon is a werewolf. And he’s not happy when he realizes he’s being preyed upon by another creature of the night. Of course, Brandon’s plan to assert his dominance over Thane proves to be intensely satisfying for the both of them…

Thane is an incubus and he’s out on the town looking to feed. After passing up several possibilities he encounters Brandon and the tables turn on Thane. Both have an experience they didn’t expect, but where things go from here is another question for them both.

The work is, as a whole, very much a hot flash which centres on Thane being dominated by Brandon as soon as possible after they meet. It is rather rough and, on occasion, animalistic in tone, but then this the story of an Incubus and a Werewolf, so that does have to be expected. There is story, mainly at the beginning, before the two meet, which is well done and I found that well done as a whole. But Thane’s past, who he is, other than being an Incubus on the prowl, doesn’t really come into the forefront of the story.

While seeing the world through Thane’s eyes as his need to feed his hunger comes into the fore of his thoughts is very clear, there’s more to him than just this, and it is hinted at, but only hinted. I would have liked to have seen more about his past, why he was where he was, who he is. Thane isn’t just an Incubus looking for a meal, at least to me, and not having that carry through the story kept diverting my attention from the moments that came after the two met.

From the moment they do meet, it’s clear that there would be a fight for dominance, as well, since there is a Werewolf in the story, the creature had to appear as well. The thing is, if Thane has horns or a tail or wings or anything really like that, it never appears in this work. He seems, as a whole, very much human, save for taking sexual energy from his partners. So the story is less about Thane himself than it is about the Werewolf having his way with him.

I found when the work turned into a hot flash that it was a bit too violent for my own tastes and as such that part of the work didn’t hold me very well. I don’t care for abuse or similar sorts of things and this part of the work just didn’t connect with me on that level. For some it well may, but I just couldn’t get past the violent nature of the encounter.

The main problem I have with the work is that the beginning sets up a lot of possibilities about learning who Thane is, what this series makes of Incubi. It allows for some story to be set up, to tease something more, which isn’t really delved into very much. But then the work turns into a hot flash where any character development is, for the most part, lost in the heat of the moment. I like story in equal measure to erotica and in this case that didn’t quite work.

Book two in the series, Incubus Stories: Visit from a Demon, is expected to be released very shortly and I hope that the author delves into Thane’s past more and the work is less of a hot flash. I think balancing the two would make things more interesting. There was something important missing in this work and it needs to be in the next…