A Review of Incubus Stories: Werewolf Lust by Felicity Quill

A split personality wig or just a mistake?

A Review of Damned and Desired by Kathy Kulig 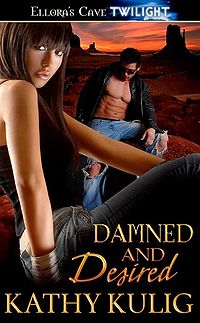 Damned and Desired by Kathy Kulig

A review this time of a work that appeared almost five years ago. Some might wonder about my reviewing books like this from time to time. My thoughts are that every work deserves to be looked at, thought about, and talked about. A short little flash or a massive story, each one should stand on its own.

Not all beings that appear to be Succubi are, in fact, Succubi. They may act like them, they may have similar abilities, but they aren’t quite like them. That doesn’t mean they aren’t Succubi however.

Life for some means lust, and for others it means love. The hardest thing to do is to figure out which one matters to you the most. Always.

She’s a demon, he’s a shapeshifting leopard. From their first meeting in the Arizona desert, passion ignites and trouble begins. As a demon, Sakari Lock must harvest lifeforce energy through sexual seductions to sustain her exiled world. But when Sakari meets Brad, she breaks the number one rule of Anartia – don’t get personal with your quarry. Physician’s assistant Brad Montag is drawn to Sakari’s lustful advances with a blazing desire he can’t explain, unaware of how dangerous she is.
No matter how enticing, she’s a complication he doesn’t need until he can conquer his past and regain control of his shapeshifting abilities. Sex this wicked and good can only lead to disaster. When immortals from an alternate dimension try to free their exiled world, Brad is caught in the middle of a battle that could destroy not only him, but the land he loves.

Sakari is in a bad situation. She is forced from the role she has known for ages to satisfy the rulers of her world and in doing so finds that she must take energy from humans to keep their world alive. But an encounter with one man reveals choices she never considered before, and the past she has been trying to honour.

Eventually this forces her to make a choice and with the help of Brad and those that support him, she has a chance to redeem herself for what she had done, bring closure to her family, and, if she is lucky, possibly have a life of her own.

The world Sakari is from has an odd composition in that human energy is taken in a way that is very succubus or incubus like, then through sex that energy is given to the rulers of their world and it is then used to keep their world alive. That concept isn’t quite clearly explained, but it turns into a really difficult thing for everyone to deal with. Secrets and mysteries wrapped around the fate of a world do go that way.

I enjoyed the hints of mind control and succubus-like power that Sakari showed, but I also liked her as a “fish out of water” in our world. But she wasn’t quite that in her own world, so the comparison of the two sides of her was something to follow that I enjoyed.

The villains of the work are a bit two dimensional however and I would have liked them more rounded and be more. They are too aloof, too out of touch for my liking in such a story and when they do appear it’s rather cringe-worthy as they go about lording over others and seemingly not actually doing anything to solve the problems around them.

This work is said to be a stand alone sequel to another work, but you need not read the first one to follow the story in this work. I’m not quite so sure of that to be honest. I think I would have liked to read the first book in order to get a better grip on the rulers of Sakai’s world, assuming they appear in the first work.

Well written, good heat in the erotica. The work on a sort of a cliff hanger, but the main characters at least have closure, even if the world, or worlds, do not quite have that.

Loved the characters and story, would have liked to see more of the aftermath of decisions made by the main characters. A bit more character to the villains would have helped too I think as a whole as they were a bit difficult to follow at times.