A Review of Hellcursed by Erica Hayes 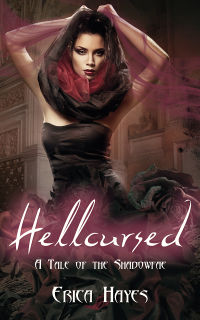 The transformation of a character into a Succubus can be a many varied thing. Sometimes it is out of love, sometimes out of hate. Occasionally they want what they become and other times the transformation was never wanted.

With this comes two possibilities. One, that the character changes from who they were into something unrecognizable. The other is that they are themselves, but cursed into an existence that is unending.

The question then is, if it is the latter, can that story be told well?

Headstrong ex-convent girl Jade has renounced the church that tried to curb her independence. Now, she travels the world, seeking adventure and the pleasures of forbidden ritual. But she’s tricked by a treacherous sorcerer, and forced into a darker kind of slavery. She’s a succubus, with a powerful demon lord her master for a thousand years. At least, that’s what he thinks. Jade accepts no man’s domination, least of all a demon’s. She’s determined to thwart her fate. But Jade is yet to discover the true meaning of demon thrall…

Jade is a woman with a problem. Her lover, or what she thought was her lover, lost her in a game to a demon. That demon has cursed her and now she is becoming a Succubus. She does not understand what is happening, exactly, but an encounter reveals her future… and it’s not a good one.

Jade is a head strong woman who wants her own way, fights for it, and holds her independence tightly. But that changes when she becomes the Succubus thrall of a Demon Lord and she begins to change. Though she is a Succubus, she has no horns or tail or wings, at least in this story, which mark her as such. She does have the power to appear to others as their most desirable woman, like any Succubus can. What’s a bit of twist on her is that the Succubus part of her nature lives inside of her, she senses it as a being in her, and she can only watch on in horror as it takes sex from being pleasure to being evil. She takes a life, and then finds that it is temptation, need, want, from that being inside of her that pushes for more.

As a whole, that is this story, the discovery of what she is, what she can do, and the ultimatum that the Demon Lord places on her. The thing of it is, in spite of all of the things against her, Jade still has a sense of herself, her own need to choose, and resists as much as she can as long as she can. Of course the deck is stacked against her, and she falls. But in that there is a glimmer of her own force of will that does press against all that she has become.

That depth does leave one looking for the main work this is connected to, Shadowfae, and to see what happens to Jade there. I’m not quite sure that this work does enough to tell about Jade’s past however, as we really only see and learn about her in the here and now. Still, that story is compelling and interesting… But sad. So very sad.

It’s an interesting glimpse into Jade, who is the main character of a larger work by this author called Shadowfae. Jade will be trouble, quite a lot of it I’m sure as her beginning tells one important thing. Sometimes the strength one has is the one they don’t know about.