At least this wig is trying.

A Review of Tempting the Demon by Elle James 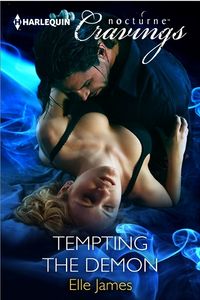 Tempting the Demon by Elle James

Evil done for the sake of doing evil really doesn’t make for much of a story. It’s far more interesting to have them be a little different, have a reason for what they do, and, if at all possible, not to be too obvious in being the one guilty.

Love can be bliss or it can be eternal torment. It can be the highest of highs and at the same moment take almost everything out of you. The question becomes, when you have to face it, is it really love you share and if it is, are you willing to do anything for them?

Dead demons keep turning up across the city. And it’s up to Katya Danske, member of the NYPD’s Paranormal Investigation Team, to stop whoever—or whatever—is behind the killing. But long, hot nights with her personal demon, sexy Blaise Michaels, are leaving her little energy to concentrate on her job.
Blaise understands Katya’s need for space, but now that he’s claimed her, he refuses to let his mate out of his sight. Not when a soul-sucking succubus and a massive storm threathen to throw the city into chaos. Besides, she needs his help to harness her own newly discovered powers. But can he convince her that the passion that binds them makes them stronger together than they are apart?

Katya is a police detective with a couple of problems. The first is that demons are being killed in the city. The second is her partner Blaise. Romantic relationships are never an easy thing, but when you are a half-demon and a demon is in your thoughts and life constantly? That’s a hard thing to deal with. So’s figuring out who the murderer is.

This is a lovely little mystery-romance work that had quite a lot going for it. The erotica is smoulderingly hot, the setting and story is well thought out and told. The answer to the mystery isn’t obvious and it unfolds in a way that feels very much like you are with Katya as she puts the pieces together.

Katya is strongly written with a past, her own thoughts and concerns, and more importantly, she wants to prove herself in a world where women aren’t known to succeed. She faces a lot of barbs and needles from her co-workers, some of which she deals with in rather unique ways. But most of all, it’s very clear from the beginning that she knows her job and is very good at it. The problem is that her partner Blaise is just as good at his job, and Katya as well.

Blaise is interesting in that he, and Katya, can share their thoughts with each other and as a result there is a cute ongoing meme. The sexual tension, teasing, wanting and desires that passes between them almost constantly doesn’t get old or repetitive. It keeps their romance and sexual needs at a simmer throughout the story and it works really well.

There is a succubus in the work, and who she is I won’t reveal in this review but it’s very obvious that she is a succubus from the moment she is revealed, both in form, action, voice and seduction. There is a bit of mind control being used by her in one scene which is very hot and did show her being a succubus and a very powerful one at that. Her background, her reasons for why she is murdering others, make sense to her, but it’s obvious that she isn’t quite right in a lot of ways and that’s a shame.

I would have liked to have seen her in the time before this story, to see what she was like and how she changed from the person she was to the murderer she became.

The work is wonderfully written with strong characterizations, scenes, and passions told. It felt like it was the right length to tell all of the story that was in this work and did not waste a moment in the telling of that story.

I would like to see more of these characters, of this world and it could easily happen. There are some intriguing plot points and characters that add to the tapestry around the main characters and in that comes a lot of questions that I’d like to see answers to.

A wonderful, hot, passionate romance with a mystery swirling that keeps you turning the pages.