A Review of Confessions of a Teenage Incubus by Kendall Cox

A Review of The Succubus’ Sub: A Night to Remember by John Dylena 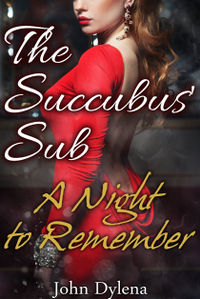 The Succubus’ Sub: A Night to Remember by John Dylena

A new work was released recently in the Succubus’ Sub series by John Dylena and, at least for me, I will say up front that, I just adored the work more than I can possibly explain. While the author states that the story doesn’t exactly serve as the next work in the series, which would be Session Twelve, he describes it as an indication of things to come.

Sometimes the hardest things to say are what we think the person in our life should know. The words are there, we think about them every day, but never quite manage to get them out in the open. But sometimes they slip out and when they do, sometimes we discover that they already knew long before we did.

Brett has never had a date for Valentine’s Day. This year, he swears things will be different… as long as he can get Myserra, his succubus domme, to agree.

But it’s hard to ask the girl of your dreams out when you have no idea where you really stand with her, and Myserra’s cryptic promises aren’t helping much.

Will Brett finally muster the courage to confront her, and can romance really blossom between a succubus and her sub?

Brett faces the most difficult challenge of his relationship with Myserra. Not demons, not dangers beyond belief. No, what he faces is asking Myserra to go out on a date with him on Valentine’s Day. If she says yes, Brett knows that it will be the most terrifying and wonderful experience of his life. Wonderful because she said yes, terrifying because she said… yes.

This work, I think, by far, is the best of the series in many respects, but most of all it is the relationship between Myserra and Brett that has matured into something wonderfully… right. The awkwardness between them, in trying to find themselves and their relationship, isn’t quite so present and that means there is a lot of character development for Brett in this story. There is a lot of insight into his fears, wants, and more importantly, what he wishes Myserra to say, clearly to him, that would remove that last bit of nagging doubt within him about how she sees him.

Along with that comes a moment in the work where the realities of living with a Succubus weigh heavily upon Brett. But there also is quite an interesting thought that comes to him, that isn’t spoken to Myserra, that would be interesting for the series to return to at some point. It puts out in the open a question that really is the elephant in the room for them both and I wonder about how that might be resolved in the future. Brett does a lot of reflecting upon how things are, where they have been and what the future might hold, but it isn’t so much melancholy as it is that little voice in the back of Brett’s mind that asks the questions that he doesn’t quite have the answers for.

There are a few lovely D/s scenes in the work, and by that I mean that Myserra is a loving Domme and Brett is her adored submissive. The connection between them is strong and each knows well what the other wishes and desires. There is an unspoken understanding that while limits would be pressed, even stretched, there would never be a breaking of a promise given. This, more than anything else is what holds me. An understanding that trust, above all, is what matters and cannot be forsaken. Here, it is not.

By far the work shows how far the author has come in his writing, how well he knows both Myserra and Brett, and in that comes a certainty. That being when a truth is spoken, it is exactly that. Brett finds that truth in a moment with Myserra and that reveals more about them both.

I just adore Myserra and Brett, and in this work the connection between them really comes out strongly, lovingly, and perfectly most of all. A wonderfully romantic story about two souls connected and the joys they share…