A Review of The Succubus’ Sub: A Night to Remember by John Dylena

A Review of Confessions of a Teenage Incubus by Kendall Cox 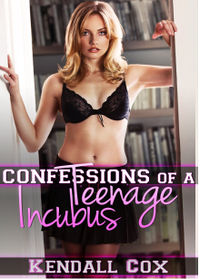 A rather short Incubus work this time to review… I do like origin stories where there is more to them than just getting the main characters into a sexual situation. I want to see some kind of history, some kind of explanation, and, most of all, I don’t want the story to promise one thing and then not deliver on it.

It also bothers me when a character “suddenly” has their powers and magically understands exactly how they all work, how to use them, and really doesn’t think about them much…

Jake is college bound with a secret that even he doesn’t know. He’s a teenage Incubus, and he doesn’t know how to control his demonic allure. What kind of stories will he have to tell about his first day at school?

Overall, I kind of like the idea of this work as a whole. The concept of someone being an Incubus and then all of a sudden having their powers appear and having to deal with that is a good place to start. Stepping into the unknown should be something that they have no clear understanding of and they need to learn about themselves.

The thing is, in this work, Jake goes from “what the hell is going on” to “I know everything she’s thinking” to “I’m a sex god” and winding up with “why didn’t you tell me this?” There;s a lot of disjointed movements between each of these points, but the thing that gets to me is how, all of a sudden, his powers appear, he understands them, and he knows how to use them. I can suspend my disbelief to a point, but when his mind goes from scared to death to total calm and controlling in three paragraphs? I found that hard to accept.

Now I know that, to be honest, the point of the story is the sex, and it’s nicely hot for a flash. It is a bit dry in tone once or twice, but gets past those spots fast enough that they don’t register too much. There’s also a bit of repetitiveness in that Jake thinks something and then says it. I think that could have been handled a bit better perhaps by having a single line of “I know what she wants!” and then not have to do the think and speak instead.

I have questions about Jake’s parents as well, I assume that they are an Incubus and a Succubus, it would have been nice to know more about them. Jake himself has no horns or tail or anything like that as well, so perhaps he isn’t all Incubus as well. This is something that would make for more story in the work, but didn’t happen. Save to sat that his parents like jokes and kept him away from others until he went to school. There could be a continuation for this story, it wouldn’t be hard to do considering the ending that was wide open and one other encounter that Jake has as well.