The right costume accessories matter… This does not.

A Review of The Black Pit by Kurt Schiffer 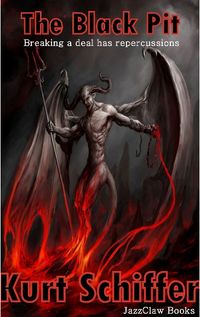 The Black Pit by Kurt Schiffer

I’ve never been one to enjoy many horror stories. Brutality does nothing for me at all. When that goes so far over the top to be, as a whole, a caricature it becomes a lot harder for me to deal with.

If a story manages to have some kind of story that keeps my attention, or a Succubus appears that is interesting to me, then that helps. The problem is when the entire story is unpalatable and the Succubus even more so considering who she is supposed to be.

Perhaps I don’t quite understand the point of the story or what the author is trying to say. It’s entirely possible that I missed the point of this work… But somehow I don’t think in the grand scheme of things it really matters that I didn’t get it.

A man with evil urges sells his soul to Satan in return for earthly power and wealth. After many years of abuse and depravity the man decides he no longer wishes to honour the deal and travels into the Black Pit of Hell in order to steal back the Soul Contract.
He meets a debauched female who travels with him. They share extreme insanity, depravity and lust…

A man tells the tale of a deal with the devil, the life led, and an attempt to get out of the deal at a very high cost with the help of the succubus Lilith.

As a whole this is a very violent, brutal work tending towards being more horror and violence than anything else. That theme runs through every moment of the work, it never pauses, and as a result there really aren’t any characters to like all that much.

The main character, and when his name finally is spoken, is a rather silly thing and it does reflect I think on the author’s own political leanings, but I won’t get into that. Through the story his views, his thoughts, really everything about him tends towards a mixture of fear, lust, and need.

And the core of all of that comes to Lilith whom the main character soon meets when he enters Hell. At the beginning of the work, I thought how she was described, her actions, and her attitude worked quite well. But as the story when on, she became a characture of  herself, becoming more violent, brutal, and simply evil more than anything else. That was a shame as at the beginning she was a strong female domme character, but as the story went on she lost the poise she had in the beginning and turned into a creature of sex and not a lot more than that.

I can’t say that I enjoyed the work all that much because at some point all of the suffering, abuse and so forth gets old, the story tends not to go anywhere and the promise there seemed to be at the beginning of the work just vanished into thin air.

I’m not sure what the point of this story was in the end, I expected more from the book blurb and I didn’t see that. Those that enjoy horror with a odd sense of humour might enjoy this work, but I honestly could not.