A Review of The Vampire Strikes Back by Dou7g

A Review of the Carnality Series by D.L. Jackson 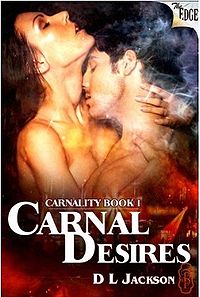 A very interesting and well thought out series this time on the Tale for review. It is the three works in the Carnality series by D.L. Jackson: Carnal Desires, Carnal Attraction and Carnal Denial.

Being separated from who you are can change you. If who you are is forgotten to the point that all is lost, your passions, your needs, your soul. What are you then?

And what happens if someone finds you at last and leads you back?

The first book is:

When Mercedes, the town librarian, enters a place no good girl would dare to tread, she meets a man who says he’s an incubus, who has an offer too tempting to pass up. After the encounter with the stranger, sanity returns and Mercedes begins to wonder if she’s lost her mind along with her memory, or if the man in the back of the adult toy store really was who he claimed to be.

The opening book to this series is a lovely mix of mystery, erotica, passion and discovery, but it also comes with a touch of sadness in it as well. It lays out the series to come really well in that the main character, Mercedes, who is a woman with a past that she doesn’t know, and Azael, the Incubus that is drawn to her… and more, are not quite as they seem to be.

There is something odd about Mercedes from the first moment and it’s hard to say what that really is until the end of this book when the truth drops like a rock onto her and she finds out that all that she thought she knew… she does not.

The two have, from the moment they meet, almost a star-crossed lovers vive to them which quickly turns into a hot flash that doesn’t take away from the story, but instead adds to it. Two strong personalities with secrets to be told is a very good way to start a series and it hooked me immediately. But it is short, barely a chapter and although it read well and was a hot read… I needed more to be told before the secret about Mercedes was out.

She is a Succubus, and Mercedes isn’t her name. 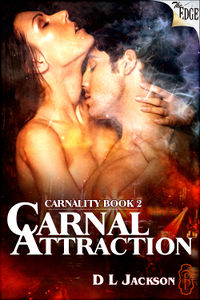 But now knowing that she is different, that she isn’t human, the questions that Mercedes has are many. Still they come to a very few that really matter.

Who am I? What am I? And what is Azael to her? All are good questions to ask, but can she have the answers to them in a meaningful way or will Azael’s body be all that matters to her?

Thousands of years have passed. Azael has returned to Jezebel, and he’s brought her memories with him. Now that Jezebel has them back, she doesn’t intend to lose them again by starving herself of life energies. So, when she encounters a broken heart in the seedy strip club where she works, she knows dinner will be special that night. This time, the feeding will be on her terms, and the man who’s wandered into her snare, shouldn’t miss the small bite of soul she takes. Much.

Mercedes has, from the last book to this one, somehow and in someway, remembered who she is and what she is. Her name is Jezebel, she is a Succubus, but she isn’t quite like any other one that has existed. And that, more than anything else, drew Azael to her and she to him. Now together, she a stripper, he watching out for her, they feed on those around them… But it isn’t what you might think it to be.

The main thing about Jezebel is, and for me this is a very important point, is that she wants to be more than she is, only take what she needs to, and, most oddly at least in this universe, she refuses to take a human soul. That, more than anything else, really makes me adore her. She has a truth inside of her, one that wants those around her to be better, happier, and more than they are. She is, in my eyes, what Succubi are meant to be. The bringers of fantasy, pleasure and dreams. And sometimes, just sometimes, they can make those dreams true.

But in all of that comes a little bit of humanity, of seeking out another that needs her, and she gives them what they desire for a price agreed to, at least in her eyes freely. But she also opens the way for them, and others, to have something that she herself has… a place to be, a heart to love, and to be able to be comfortable with oneself.

All of this is, for me, perfectly told. The heat of Jezebel’s needs and how she gives that need to another, making it more that it would otherwise be, is a joyous thing to read and it made me smile when the story came to a close… At least in this part of the story.

I think the summary however is not quite true to the story as it is so much more seductive and powerful in being so that it suggests. One should not let it give you the wrong idea about this work. It is a Succubus at her best and more. 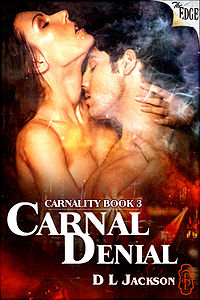 One of the problems that Jezebel and Azael have is one of demon hunters. Now this isn’t a new idea, not by any means, but how one particular demon hunter becomes involved with them, around them, and what happens to her is really the icing on the cake of this series and brings it to a wonderfully satisfying conclusion.

The third, and regrettably, last work in the series:

Another lamb for the feast. Not likely. Jezebel knows that taking a bite out of the virgin bait the demon slayers have tossed into the club is a bad idea. But there’s also more than one way to skin a proverbial cat, or in this instance, pop a slayer’s cherry before she causes any problems. There’s nothing in the succubus rule book that says Jezebel has to play fair.

Jezebel finds herself having to deal with a demon hunter named Cassidy, but not in the way Cassidy expects or would have ever imagined. Cassidy learns that Jezebel and Azael are nothing like she has encountered, or experienced. And there’s a guy in the club that has his eye on her… And she on him.

I really liked that the events of the second book became central to this, the last part of the series. In truth the beginning of that work and as well this one seem to happen at the same moments in time. There are connections to characters, events, and thoughts that entwine together nicely.

Jezebel, in this work, is more…. whole. By that I mean she’s more fleshed out as a character in her words, actions, and more. It was amazing to see her be more than “a simple lust demon” as Cassidy expected. She was thoughtful, posed questions, and more remembered her past and made amends for it in a way. And isn’t having a character redeem themselves one of the best kind of story to read? I think so.

The work doesn’t focus on Jezebel and Azael for the most part, it is really about Cassidy’s time there, what she experiences, and, finally, how she comes to find something that she had been wanting for a long time before. In a way, this story is also about Cassidy finding her dream to be real. And it was a beautiful moment to see.

The ending, the very last time we see Jezebel is priceless and I smiled when I read what she said and did. It felt right on so many levels and made the series end in exactly the right way.

It isn’t so much about Jezebel and Azael, not by any means, but they are there at the right moments to push Cassidy towards something that is so perfectly right for her. In doing so she comes to see what I knew from the moment the series began. That some Succubi and Incubi are, if you look really hard, angels too.

As a whole, this entire series rates four and a half pitchforks out of five.

I really do wish there was more, Jezebel’s past, what was the turning point in her life, that would be something that I would have liked to have seen. Who she was before that moment matters and i think it would have made for a contrast between the then and the here and now.

It would be nice to have that, more of the story of how they came to have the club, and perhaps some stories about those that work there as well. But it is likely never to be and I’ll have to be happy with a Succubus that is one that I respect for who she has turned out to be.