A Review of Summoning the Succubus by Helen Atreya

This costume actually gives me thoughts to ponder…

A Review of Soul Seduction by Joy Daniels 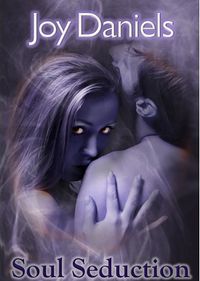 A review this time on the Tale of the first work in a new series that begins with the appearance of a Succubus, a very special one, and a man who is every bit as special.

I’ve spoken about soulmates, how nothing can keep them apart. It was wonderful to find a work that tells that story, giving it not just life, but joy. Sometimes what you think is impossible isn’t when the right person believes in you…

An eternal Succubus
For centuries she has visited men in their beds, arousing their bodies to harvest nefesh, the life energy that the demon world depends upon. Any man will do, and she has never visited a man twice. Until now.
A mortal man
For weeks Sean Moran has dreamt of a beautiful woman who pleasures his body and ravishes his soul. Afraid that he is losing his mind, he follows a trail of mysteries and magic to an extraordinary conclusion.
One night
In the space between the worlds, Sean and the Succubus come together to experience passion in each other’s arms. But in their union a powerful secret is revealed—one that could endanger their very souls.
Forever.

Sean has dreams every night about a woman who has captured his soul. He searches for the reasons behind his dreams and is told that a succubus is coming to him. Making a choice to be with her for real he draws her to a world where they are together for one night. And that one night changes them both.

I love story. I love a story where the ending isn’t really obvious from the start, is one where the characters aren’t given everything on a gold plate. I like to see them grow, become more, discover that in the grand scheme of things they are so much more than they could believe. This work touches on all of those points and more.

Sean is a wonderfully told character who over time finds his way from believing in what he knows to what he discovers. There are moments of confusion, disbelief, and more, but in spite of them all when his singular need comes to the fore he’s willing to take a chance to find out the truth.

It is that decision, the steps taken, the moments before he finally has what he needs beyond all else in his soul that are touching and so very well told. Sean is a very special individual… but then so is the Succubus of this work.

In the beginning we do not know her name, why she is drawn to Sean, why he haunts her and draws her to him so much. The confusion she shows, the risks she takes for reasons unclear are hints of who she really is. When that reveal comes, when she learns the truth, who Sean is, who she really is, it’s a heartbreaking moment in the story. When Sean asks her name and she cannot say, when he ponders her name and that connection comes which opens the door to the rest of her story, it is an amazing moment.

With all of that also comes what she believes to be true, what she has known being a succubus. When she remembers her past, the pain that is told within her is devastating. What she does when she knows the truth is a moment of desperation, an attempt to survive knowing what she truly wants is impossible.

The climax of the story is wonderfully told. It is the moment when her own truth comes and all that the evil around her wishes presses against that. The moment speaks to what happens when soulmates are found. And I adore that in a story.

The erotica is sweetly hot, it isn’t just she pleasuring him, or he pleasuring her. It’s the experience, the tastes, sounds, smells, the feelings within and without that are so joyfully told that wrapped me up in this world and kept me turning the pages looking for the next wonderful moment to appear.

The work ends on a lovely note, one that points a perfect close, but also leaves the future open and promising. It appears that this work is part of a series, and I would like to see more of Sean and Ella. Perhaps that time will come.

Beautifully written, a joy to read, characters that one cannot help but care about and hope for. And hope is everything.