A Review of Death Becomes Her by D. Valley 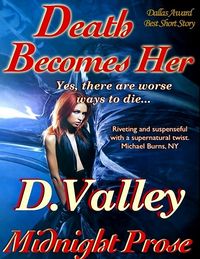 Death Becomes Her by D. Valley

Knowing of one’s self is more than simply being aware of who you are, but more importantly what you are. It is part and parcel therefore that losing one’s self, becoming not just lost in spirit, but in body and mind can be crippling to an extreme. So what happens when a Succubus is punished? What happens to her then?

What does she think about, feel, know inside of herself? What happens when someone opens her eyes to who and what she is? What comes next?

It is an interesting thought…

A chilling paranormal tale. Bella, a forlorn temptress, has lost the will to live after a fiery rendezvous with Dominic. Dominic is not what he seems. Neither is she. As fate would have it, there are a legion of ways for one to lose their soul. Yes, there are worse ways to die…

Bella is a wreck. Falling apart, pining for a man that she feels like she needs like no other. She thinks about ending everything, but cannot. But then he returns and she is taken on a journey to find who she is, why she is, and more.

Bella is, quite clearly, a Succubus, This is made very clear by the situation she is found in, how she looks, what she remembers about her past. She has no horns or tail however, but she has the powers of a Succubus in that she does feed on the life, and souls, of others. But interestingly, only one specific kind of person and in that I found I could accept her motives and reasons when they were explained.

Bella’s personality and character is stunningly told from the first page and I rather enjoyed that. She isn’t a cardboard cutout, nor stereotypical. This made me like her even more as the story progressed along. All of her emotional distress feels right as is the moment when she is brought to what and who she is by Dominic.

Dominic is an Incubus, again without horns or tail, and what makes him more is that he cares about Bella, wants to make her whole and return her to being who she is. He pushes and shoves her into action, though she never really wants to. He is the driving force in the story that moves it from watching a woman falling apart to one of both rediscovery and excitement in being whole once more.

The work really isn’t erotica per se, and I think that having it turn in that direction to a great extent would have ruined this work as a whole. The author focuses on the mystery that surrounds Bella, takes the reader on the journey, and at the end you are left with so many questions about both Bella and Dominic.

As a whole, the writer does very well in telling this story, making one care about Bella and staying with her though out the work. The only real problem i have is with the very end of the work. I don’t think it fits with the rest of the story and seems like a sentence added for the sake of having it appear. The mystery, story, events, and conclusion create a world that really does have very much going for it… But it ends far too soon and I wish it had not ended where it did. The work feels like the beginning of a larger story and that would have been something to see.

Far too short for all of the story that exists here. The ending is not quite what I expected it to be, and really this should be the beginning to a much longer work by far. Two characters this well developed, told, and given form and yet the story can only begin to scrape the who of them both. It would be nice to see something more.