A Review of Gender Swapped by the Succubus by Sinn Lee 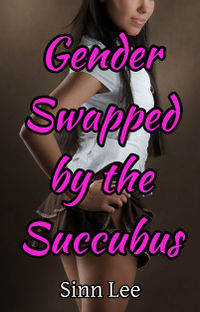 Gender Swapped by the Succubus by Sinn Lee

I adore intelligent Succubi. I think that the most wonderful thing I can read is where a Succubus comes up with a plan, an idea, that shows she’s more than sex on heels.

It amazes me that, up until the point I read this work, no one came up with this simple, logical means for a Succubus to get what she needs as easily as possible. That’s not to say she’s lazy, far from it. I think she might well be one of the most intelligent Succubi I have read in some time…

Ben’s life is turned upside down when a name appears to him in a dream. This single event is a domino effect which leads to Ben’s gender change and servitude to a succubus. The succubus Amun’Kori decides that it’s better to have Ben do all the naughty work with men, instead of always going out herself. Why bother sleeping with men and stealing their souls when she can gender swap Ben and have him screw men for her?

Bill has a very memorable dream and with that dream comes a name: Amun’Kori that name leads him to a website where after a short chat, the succubus Amun’Kori appears in the flesh. Soon after Bill is transformed into Brook and only wishes to serve her Mistress’ will.

This is one of the most unique succubus stories that I have read for some time. The gender transformation aspect has appeared before, but the reason for it, the mind control inherent with it is actually quite a bit different and does, in a way, make a lot of sense.

Amun’Kori’s reasons for her going to Bill and transforming him into Brook, looking at things from the perspective of a Succubus did give me pause. However if Kori is the only Succubus that is using this method, which really seems to be unlikely as I would think that using others to gain what a Succubus needs would be inherently obvious.

But it is the method Kori uses, how she connects with Bill that just really worked well. After all, you can find anything on the internet can’t you?

Once Bill is Brook, there’s a lovely bit of mind control that comes into play that is very lightly played in the story, By doing so, the use of it doesn’t seem to overwhelm Brook, makes her want to obey her Mistress and do her bidding.

While there isn’t a lot seen of Kori erotically, there is quitea lot with Brook. The hot flash is quite well done, if rather short and to the point however.

Setting aside the erotica, this is another example of a story, characters and universe created my this author than needed another ten or so pages to fully develop into something more. Or be the opening chapters in a longer story.

But this is, I regret, too short and leaves a lot of questions I’d like answered about Kori, about Brook’s new life and more.

Too short for what is created, it would have been nice for more story to be developed for all of the buildup in the beginning. I like Kori, I really do. Perhaps she’ll appear again sometime…