A Review of Succubus vs Vampire by Dou7g

A Review of Wicked Devices by Josephine Ballowe 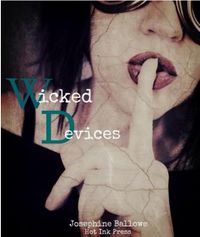 There is a problem with stories about Succubi that I still have. I do not understand why it is that so many authors take them to be a kind of vampire. They are not, but it still happens. What bothers me more is that they have to go “wild” over blood at some point and that makes little sense when they say that they live on the sexual emotions of others…

But, having a Succubus make her living by playing the roles that others need? That is an interesting idea… even if she isn’t aware of what she is…

Lisbette, a specialist in expensive role-play has met her match in Malcolm. When this mysterious stranger and his companion, Persephone, quite literally take her to the banks of Hell, and they make Lisbette expose her darkest desires that reveal the truth about her past? Or is Hell really more like Heaven?

Overall the story is interesting at the beginning. Lisbette talks about herself, that she makes her living in adult role playing and then tells about a client wanting to meet her at a bar. For the most part nothing seems odd until she goes into a back room with him and then things become very odd. She is bound, somewhat tortured, and then told that she is a Succubus. She does not believe it, but eventually has not choice but to do so and then face her future.

Far too much blood and similar moments in this work for my liking. I still do not see why Succubi are seen as vampires and they have to deal with blood. Beyond that some editing would have been helpful… and another part of the story to explain all of the question left unanswered…