A Review of Halloween Ecstasy by Maxwell Avoi

A Review of Succubus Magic by Dou7g 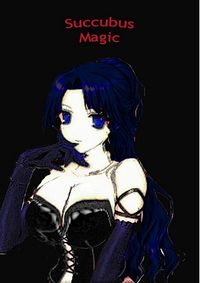 The thing about having power isn’t the having, it is the using. To find out what you are capable of, what you are willing to do, and what your reason are matters. It isn’t a question of just being. It is what your being is. Succubus, mage, human or otherwise, the choices you make are important. Sometimes more than you know at the moment you make the choices you do…

In the first book Megan, an apprentice mage summoned a Succubus to earn her journeyman status. The Succubus convinced Megan to let her escape the magic circle that confined her and they had much fun together. She drained the powers of the mage who was teaching her and told him he had to teach Megan especially well to earn them back. She also gave Megan a beautiful body to match her own amazing curves.

In this volume Megan has to deal with the amorous attention from the villagers her new body draws and when one of her friends gets hurt in the ensuing fight she must ask the Succubus for help. But the Succubus intends to claim a price for any assistance as pure altruism is not in the nature of a demon. When Megan and the Succubus (who goes by Kendra) meet again sparks fly as the chemistry between the two burns hot as ever. Will Megan succumb further to Kendra’s infernal machinations or is the Succubus falling in love with the beautiful mage?

Megan’s life takes a turn when she has to defend herself against the actions of a bully and the actions of her sadly misguided teacher. When a dear friend is near to death as a result, Megan calls for Kendra and finds that there are some deals that are more complicated than she expected.

Megan, as a character, has grown in a lot of ways in this work compared to the first. She has more power, she understands magic better and there is a certain strength within her that appears in this story. There is a truth told about how she sees Kendra the Succubus, and in return Kendra admits to something that seems like she never expected, nor can really admit to herself.

The pair are, in a lot of ways, mirrors of each other’s personalities but the differences seem to be blurring as the story is told with Megan turning a bit away from who she was in the first work. As a  whole that character development works well and it is the moments when she has to make a choice, and life with it, that are very telling for her.

In the same way, Kendra, when she returns, is both taken by and taking Megan and there is some very interesting secrets that pass through Kendra’s thoughts that added a lot to who she is. While she is a Succubus, there is something more to her developing in the story. She does, of course, make bargains and in those deals she gains power and favours which I am sure will come back to haunt Megan and her friend at some point. In spite of the “evil” part of Kendra, there is a tenderness towards Megan that I thought worked well and some of the internal monologue and confusion added to that well.

There is character growth, there is an expansion of the story universe, there are new characters brought to the fore that matter and as well some leave the story as well. The story has a tone that is a bit different from the first work, not too much so, but I thought it was slightly off somehow, The main oddity I felt was when Megan had to defend herself and what happened as a result. Megan does so twice in the work and while the first time I could accept, I felt that the second need was a bit more violent than I would have expected from her.

In both cases, Megan has to fight for her life, and as such she has to use all of her abilities to do so, but the first time I think was written better, felt more natural and just worked better. The second battle is a longer one, much more complicated, and the solution she unravels does make sense and I can accept that part of it.

I do understand why Megan did what she did, but as a whole it felt a bit wrong in the story. The incident at the beginning of the book was fine, it wasn’t over the top and it didn’t feel like she was acting out of her normal character. The second time, when she was in the fight that was a bit over the top in that she seemed to “turn” in a way that didn’t fit her personality. Now, this might be part of her being changed to look like Kendra, it could be her “turning” slightly “bad” but I don’t think so. That sort of thing, considering Kendra’s thoughts about Megan doesn’t make a lot of sense.

I think that the second work lost a bit of the… let’s call it… “intimacy” that was in the first book. Considering the events in this book, that has to be expected, but I think it hurt the story overall to an extent.

Did I like it as much as the first book? I have to be honest and say not quite so much. It felt a bit less fun and I missed that to be truthful. The erotica was lovely as it was in the first, the writing is just as wonderful as are the characters. The story just seemed to lose itself at a couple of points and in doing so that hurt things some. I still love Kendra and Megan very much, I just would like the fun and passion from the first work to have been as strongly written in the second one here.

As a whole the work continues on well from the first book, though with a couple of moments that I felt didn’t quite fit into how Megan seemed from the start of the series. Book three is already out and I will be reviewing that work on Tuesday.