A Review of Succubus Magic by Dou7g

A Review of Halloween Ecstasy by Maxwell Avoi 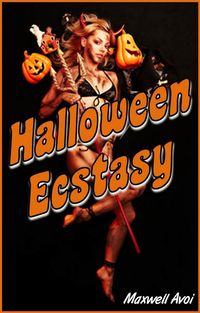 There is an interesting premise that comes when thinking about Succubi or Incubi and that is: What happens when all of the sex gets to be too much? By that I mean at some point one might become jaded or feel like it is “the same old thing” over and over again.

So then the question is, just how does one get out of that rut and find things if not exciting then at least more passionate then?

It’s Halloween at Absolute Ecstasy, and the lady of the house needs a vacation. It’s a good thing that Spell Nellie can help, though it might make things a little uncomfortable for the patron that Miss Stacy switches places with for the day…

Stacy, and TD have been cursed to become what can only be described as a Succubus and an Incubus. Their sex drives are well over the top and every moment, for the most part, is about sex. That’s a problem, a huge one, and they want to take a break if only for a while to remind themselves what else is out there in the world. A friend offers a means to do so and they escape for a day with the help of two unknowing, but soon willing partners.

Stacy is a Succubus, there is no doubt of that and TD is an Incubus of course. We see Stacy’s wings and her description physically is that of a Succubus that looks somewhat like a sex toy, the same can be said about TD as a male. There is a interesting twist about the two of them that makes their situation quite fascinating as well.

But it is the need in Stacy, the wish for something different, something more than what she is at that moment that is telling I think. It gives her depth and in that I find that I liked her more and more as the story unfolds. TD as well supports her, helps, and in that comes a character that again is more. The two of them together are a wonderful couple and I really adored them.

There is a lot of sex in this work. That’s not honestly a problem as it fits the characters, the situation they are in, and the life they lead. What’s interesting is that in spite of where they find themselves they aren’t simply sex toys and they aren’t mindless. I like that a lot as interspersed with the erotica comes a story about needs and wants.

The supporting cast, I hesitate to call them all minor characters, have their quirks, personality, pasts and more. That’s a lovely touch and it adds a lot of depth to what otherwise would have been a hot flash with no substance.

The author, as always, tells a good story with nice heat in it. But it is short and I found myself wanting to know more about Stacy, TD and their world. More than what was told. I think the work as a whole makes for a good opening to a universe that I’d like to see more of.

I would have liked to know more about the past of Stacy and TD, it sounds like an interesting story. The work itself has some neat twists and turns in it, the characters are really quite fascinating too. I’d like to see more about them all really.