Succubi Image of the Week 366

A Review of Incubus Needs by Dawn Wilder 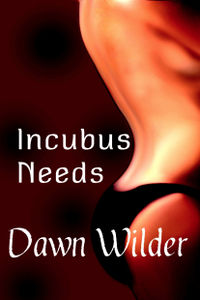 A tale of three Incubi in need and the woman who comes to their aid this time to review on the Tale. One might expect that a story which can be described in this way might be simply a hot flash and nothing more. This work isn’t. It’s a story about discovering one’s fears are misguided and the ability of some to control what they are and allow who they are to come to the fore.

Character matters, I’ve said this before, and in this work there are stories to tell about each of them. The telling of that story makes this so much better than I expected it to be.

Raine had no idea she would be called on to service stranded incubi. She also didn’t realize how enjoyable the task could be…

Raine receives a call for help, one she never expected. What makes it more concerning is that she is asked to help a group of Incubi who have not fed in some time. Raine goes to their aid and discovers that what she thought she understood about Incubi pales to the truth about them. All of them.

I thought Raine was a strongly written lead for the story who had a lot of history behind her. That past really isn’t touched on all that much, and it would have been nice to understand more about where she was coming from. That said, from the first page it’s obvious that she has a sense of honour, the need to be herself, and most of all, she knows her life is her own. But that does not mean she has no feelings or emotions. Help is needed and she wastes no time in doing so.

Eventually, after a slight misadventure, she arrives in the camp of the Incubi and discovers that one of them is close to death with the others not all that well. Liam, Cy and Ramsey, the three Incubi she encounters, accept her aid, which leads to three wonderfully hot pieces of erotica. Through this is it made clear that each of them is unique and passionate in their own ways which tells Raine something she didn’t understand about Incubi, assuming they were simply beings that fed on sex as she puts it.

Raine remains with the trio for some time, they are being trapped by a violent storm, and a relationship slowly begins to appear. It is that connection between the three of them that adds so much to this story and made it more than I expected it to be. While there is no sign of horns or tails, the three Incubi looking handsomely human, they are some of the most tempting Incubi that have appeared in any story I have read about Incubi in some time.

When the conclusion arrives, I did feel like there was something missing that I would have liked to see. There is an opening for things to progress a little further, some closure, perhaps a… connection I think is the best way to put it. I could see about another ten pages of threads to tie up which didn’t happen and that really was my one issue with this work.

The writing is solid, the characters have soul, heart, wants and needs. The erotica isn’t a simple hot flash, the story makes it much more than that. It’s a shame that it ends where it does, but the trip is well worth the read.

I’d like to see more about Raine, Liam, Cy and Ramsey. I think their relationship, their future would be something to read about. Perhaps that will happen sometime.