A Review of The Naughty Witch’s Command by Sinn Lee 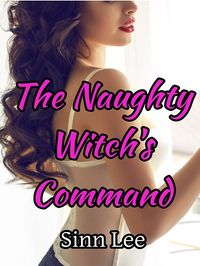 Sometimes another character has the upper hand, or thinks they do, and when the truth comes out the story could go really bad or really hot. Few authors can manage to get that balance right and when they do it’s amazing to read…

Rae is a witch in a new town, devoid of other witches. She has no one to keep her company, until a handsome young man moves in next door. Rae makes the logical, and naughty decision to cast a spell on her new neighbor and turn him into her willing boyfriend. But things don’t go quite as planned for the witch and she soon finds herself in a steamy situation with an incubus she hadn’t expected to meet, or be taken by.

Rae is a witch, a modern successful one, at least in being a witch. But she lives alone, has no friends and there isn’t anyone there for her to share her life with. One day Wess moves in next door and Rae decides to have some fun with him. The problem is that she has her fun, then finds out that Wess is an Incubus.. And Rae invited him into her life.

This is a cute little hot flash about a woman using a spell to have her way with a man and then discovering that man is something more than he appeared to be. It’s a bit of a cautionary tale in a lot of ways, but most of all it very much feels like Rae wanted something badly enough that the universe decided to put her and one specific Incubus together.

Rae is really very interesting as a whole, her story is a rather unique one and the setting up of her world, her situation and the desires that she holds tells a lot about her before Wess appears.

Wess, in his human form, is a lovely piece of beefcake, and in that he’s temptation that Rae cannot resist. What’s nice is that in his Incubus form, he’s the same person, just with red skin, horns and a tail. But there’s more to him.

He isn’t stereotypical, he has soul, he cares, he is willing to give Rae what she desires and when she asks about the legends, about her soul, the answer he gives is really the icing on this story.

While the work is a hot flash erotica wise, there’s the beginnings of a romance, a future between these two characters. Where the story ends works well in many ways, but, as seems to be the one thing about this author that troubles me the most, the work comes to a close with a promise made, a future story to be told… and it isn’t.

It is a prime example of how this author can build a world, create two characters that I caed about and when all of the passion comes to the end I’d like to see more.

I’d like to see what happens when Rae’s mother finds out about Wess. I’d like to see if Wes is as good as he seems to be or if that was all a front for Rae. I’d like to know more. Because there is a lot more to be told.

Lovely heat with a neat bit of mind control that I thought gave a lot to the story. Two characters that I adored and want to see more of. I hope that happens sometime. I really do.