Some lovely art on a Lilith Aensland Tribute YouTube 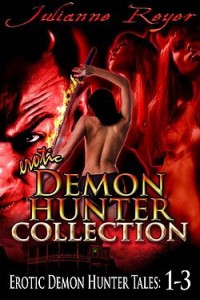 Casey meets Nick. Nick has a problem, Casey tries to solve it, and quite literally all hell breaks loose before the story is finished.

The focus in this series is Casey and Nick and they do meet, summon, and encounter a various number of supernatural beings. There are Succubi, a fleeting scene for the most part, and what could be an Incubus, but they appear for only a short time and are no more. Again, the point of the story are Casey and Nick, so this has to be expected, but their running from one encounter to the next felt forced and unfocused at times and I’m not sure it needed to be as such.

The main characters, and really all of the others as well, are very interesting and speak with their own voices. I enjoyed seeing each of their personalities appear and as the series went along there was actually quite a lot to be told. The vignettes between each of the moments of erotica told a story and built upon what had been revealed in the past.

The erotica itself has some very hot moments in it, but there are also some points which made me stop and wonder what was happening exactly before continuing on. By that I mean the situation that Casey and Nick find themselves in seemed odd. It also felt like there was some repetitiveness in what the two of them are involved in.

The author writes excellent characters, their settings are well thought out, and as a whole I wasn’t taken out of the story because of a mistake in editing. The erotica might have been a little bit more emotionally and tied the main characters together more than it did.

As a whole I give this series three and a half out of five pitchforks.

A bit more story, a little less over the top sex and it would have been a lot better I think. There’s so much in the background of both Casey and Nick that isn’t really explored and I think that it should have been. More flashbacks or reveals or… something. I’m not honestly sure what, but as the work is the heat overcomes story and it need not.