A Review of Taken by the Incubus by Austin Dixon

In this costume, steampunk and Succubi do not mix…

A Review of Succubus Temptation Part I by Dou7g 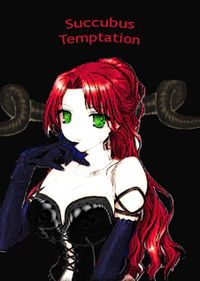 Succubus Temptation Part I by Dou7g

One of the things that I like to see in a Succubus story is that the Succubus herself is not simply evil. She needs to be seductive, have a way with words, and what I think is the most important thing, she needs to have a sharp mind that can see… options.

Megan, a young apprentice mage summons a succubus to prove she has enough power to become a journeyman mage. She surprises herself by having the magical strength to actually bring one forth and confine it to a protective pentagram. But she hadn’t realized just how tempting and enticing a beautiful Succubus can be. The Succubus uses all her wiles and powers of persuasion to tempt her into letting her free.

Megan decides to summon a Succubus, to prove a point. She manages this, quite well actually, but the problem is that the Succubus, Kendra, isn’t anything like Megan expected. A few suggestions, a bit of Succubus magic and Megan discovers how much fun it is to be a Mistress to a Succubus… Or at least that’s what she thinks she is.

I really quite enjoyed this story for the characters, both Megan and Kendra have amazing personalities, stories and drives in the story. The story itself, while having a lovely bit of erotica in it, has one of the best examples I have read in some time of a Succubus being seductive not just in form, but in words and how she plays upon the needs and desires of the one that summoned her. There’s some very hot mind control erotica as well in the story which serves to make the story hotter, but also open the story up to being more than just a little hot flash.

The slow seduction of Megan, of using her own untapped desires, is done in a way that doesn’t simply “make” her fall to Kendra. There’s a struggle, a bit of a battle of emotions and thoughts that goes on and in that the story gains a lot of heat as well. There is a neat use of transformation as well that fits, doesn’t feel out of place, and in the end leaves Megan with a bit of a problem that I think was just perfect considering that Megan was trying to make a deal with a Succubus.

Kendra, the Succubus of the work, is not stereotypically “evil” as most Succubi are told to be in stories like this. She is seductive, having just the right ways to tempt and tease Megan as the story goes on. She has some mind control abilities that aren’t simply “there” but play out over the story, their effects on Megan deliciously told, and the story of Megan’s enslavement is, in a way, more a loving thing than one might expect at first. But it is clear from the moment that Kendra appears that she isn’t “typical” as a Succubus and I did adore her personality very much.

The writing is very good, save for two points where the story stumbled slightly in how the characters were talking to each other. The speech seemed a bit… off… for some reason and I think that’s mainly because the words didn’t quite match what was happening in that moment. There wasn’t anything that really took me out of the story and when the erotica came that really flowed well and weren’t points at which things didn’t fit together right.

As the opening to a series, the work stands out well, brings out the main characters and leaves things at a point where there is a clear story going forwards for all of the characters. The unfolding of that story leaves me with a good impression and I really want the next part of things to arrive soon so that the story remains fresh in my thoughts. Good stories and characters do that and in this case, that’s plainly true.

Really enjoyed this opening to this series very much and as a Succubus, Kendra is what I like to see in a Succubus most of all. The second work in the series is expected to be released soon and I do look forward to that. Megan will be having an interesting life going forwards, but being that Kendra is out and about in the world I wonder what mischief she’s going to get into next…