A Review of Soul Crush by Padraig E. Griffiths 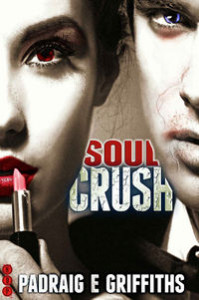 A review this time of a work that sadly was no longer available when I wrote this review. It appears that it will be published sometime in the future, and I hope it is for the Succubus that appears in this work is one of the more unique Succubi that I have read.

The question of being cursed, of becoming a Succubus can be the source of a story with meaning and with laters of heat and more. It can be the means for redemption or damnation, depending on the character. It is said that one should be careful what one wishes for… Sometimes you get exactly what you deserve.

Successful, charming, and incredibly good-looking realtor Josh Williams thrives on the corrupt lifestyle working in the city brings. When an opportunity presents itself, he buys an old mansion on the holiday island of Lafrette where he can live out his seedier playboy lifestyle and let his darkest sexual fantasies run free. After all, the poverty-stricken working-girls of Old Town are plentiful, cheap, and extremely willing to do what it takes for a drop of wealth. But Josh soon discovers that he is not the only sexual predator around. The manse has an explosive, soul crushing secret of its own. One that he may not be able to escape from.

Josh, the main character of this work is, to be blunt, completely unlikeable from the moment he appears. There really are no redeeming aspects to him whatsoever. His actions tell so much about the person he is, what he desires and, sadly, his view to all of those around him. His fate is not completed revealed from the beginning of the work, but it is telegraphed quite clearly by another character. What remains from that point forwards is how exactly that will happen and the means of it happening.

Maria, the Succubus of the work, does not appear for sometime but her influence, power, and entrapment of Josh is presence throughout the story. When she does appear, and traps Josh, the scene makes her not to be stereotypical, which is good, because in truth her abilities, her presence in the story, makes it important that she isn’t. She displays some aspects which reflect upon the myths of Succubi and as well Incubi which I felt were handled well by the author. I enjoyed that Maria was not a single form but endless variations and combinations. With that came a strong dominant personality which she used very well to control Josh over time.

When the climax of the work arrives, she gives Josh really no choice and in doing so the work ends on what really is the best possible way. A postscript does leave the door open to further stories and a telling note about humanity which, sadly, is something that will never change.

Excellent writing, the story has the right mix of intrigue and mystery that winds itself around both Maria and Josh. The erotica has heat in it, Maria herself is an excellent Succubus in so many ways which I enjoyed. I didn’t care much for Josh who I felt took away some of the heat in the story, but as that was mainly due to how much I disliked him couldn’t be avoided. The author creates a world around the story that paints a vivid picture in one’s thoughts and that in itself is a talent rarely seen.

It’s hard to give this work more because of Josh, his actions, and who he is. While that has to be in order for the story to play out, it hurt, for me at least, the heat that Maria brings and the Succubus that she is.