A Review of Taken By The Succubus by Sinn Lee 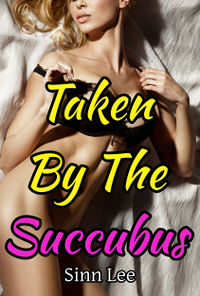 Taken By The Succubus by Sinn Lee

Somehow, for me at least, there’s a problem with writing a story and not having names for one’s characters within it. I cannot quite understand how a story can be written when names are not shared.

Now, it is said that names have power, and in the case of Succubi that is quite true. Knowing the name of a Succubus does, in some cases, give one an advantage… That is assuming of course, one wants to take advantage. Or be taken advantage of…

Wendy hates the town she’s moved into. Recently laid off from the job she moved for, she’s settled for a crappy job she can’t escape. The only solace she finds is that of the blissful pleasure the demon in her dreams can give her. It’s her dark little secret and the only thing that keeps her going. But one day everything changes and she’s able to be taken by the succubus, for real.

A woman dreams every night about a Succubus, one that gives her pleasures and fantasies that are wonderful and more. But then there is a knock at the woman’s door and the Succubus is not a dream anymore.

This is a lovely, passionate story about the discovery of one’s wants and needs in fantasy then becoming reality. The writing I felt was some of this author’d best when it comes to setting up the background of the main character, why she is in the situation she finds herself in, and the dreams that have twined themselves around her.

The Succubus is a lovely creature, the silver horns I thought really worked well with the rest of her form. When she appears in the real world, her human form make me smile, the connection when the main character of the work sees her was instant and certain. She’s a bit dominant, but not in a harmful way. She cares very much about the woman, offers her a future, and then the story moves towards that becoming the new reality.

One thing bothered me however. We never learn the names or either of the two characters in this work. Personally that bothers me because I like to put a name to the image that comes to me when I read a story. Not having that for either character took some of the heat from the work, but not overly so.

The work is a lovely hot flash, the love and passion between the two characters is very clear and in that the story connects things together well.

The Succubus does tell the woman that she will not give her name until the woman gives herself freely and, in truth, that happens by the climax of the work. Then it ends on a bit of a cliffhanger, the Succubus’ name not known, their future not said.

The work really begs, at least for me, for another twenty pages of story to say what comes next, what both of their names are, and more. As the opening chapter to a longer story, it really would work well. Like this the result for me was a bit frustrating.

Names would be nice, a longer story nicer. There is a lot to play with here and I wish that author would do so…