The 2014 Succubi Year In Review

A Review of Murder by Succubus by Leona Bushman 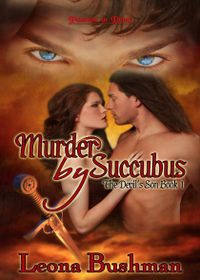 Murder by Succubus by Leona Bushman

I think that when a series is started by an author there needs to be one very important factor considered. The villain cannot be made of paper, be far less intelligent than the hero, and, in all honesty, should be equal to them in power, goals, and strengths.

In no case should the villain, especially if she is a Succubus, be stereotypical, single minded, or aloof. She should be a force to be reckoned with. That force should be her mind, her abilities and not, ever, simply showing that she does evil because she is a Succubus. That’s simply… boring.

Succubus versus the devil’s son: who will win the fight for the soul mates’ souls?

Kristen and Ken, high school sweethearts, reconnect over a dead body who turns out to be Ken’s boss. Still, their feelings rise stronger than before.

Damian O’Brien’s personal mission is protecting soul mates. Hell likes nothing better than stealing the souls of humans who are soul mates to be severed for all time. Damian lives to thwart his father, the leader of Hell.

Fighting a powerful Succubus and her high-level demons forces Damian to work with his father and angels. Can he save the soul mates without losing the one thing that keeps him safe from his father’s clutches—Damian’s human soul?

Damien is a detective and there’s another murder in the city. But that murder comes with strings attached… and none of them are human ones. His past comes to haunt him and with that past comes a Succubus at the centre of it all.

Overall the work is a well told mystery-adventure with many varied and interesting characters. There are layers to each of them which are hidden in both shadow and light, the futures and possibilities unclear until the right moment when they come to the fore. The setting is just a bit different than reality and it is in that difference where the author shines.

Damien, the centre of this work, is unique, with a past that is not told in full here. That’s a bit of a shame because the hints about himself and his parents, especially his mother are gripping, but there isn’t really a payoff in the case of his mother while his father isn’t a surprise, the series is called “Devil’s Son” after all. It is odd as through the story he keeps trying not to say that the Devil is his father and that becomes a bit old by the end of the work.

Kenny and Kristen are the other main characters here and they are soulmates, which I rather thought was a neatly told and played thing in this universe. There’s a deeply held love between the two of them that I dearly enjoyed from beginning to end. The connections and changes in their lives as the story went on just made them feel like a real couple in love which, again, I adored. There is a lot of confusion, both in  their relationship and as well what they are both capable of which connected the rest of the work together.

The Devil was not a stereotype thankfully in his short appearances and neither really were the angels or devil or for that matter any of the overall supporting characters.

The only real problem was the single succubus of the work Shanara. She is the main presence of evil in this work and as such I expected quite a lot from her. I didn’t get what I thought I would from her. She’s mostly stereotypically evil, likes pain and sex and… that’s honestly about all there is to say about her. Her physical form is only vaguely hinted at, mainly that she is beautiful but in that beauty is the evil she is. She is described as the “biggest bad ass” in Hell and if that means she likes to cause pain, control others, and as a whole simply be evil for the sake of it, then yes she is.

My problem with her is that she would have to be more than this surface image she gives for the plans and efforts she makes and that part of her isn’t told. There are brief mentions of her being more, but that doesn’t pay off in this work. In the end it comes down to sword fights, blood and violence when push comes to shove and that doesn’t seem right for a succubus. She shouldn’t have to depend on violence to get her goals, but in this work that doesn’t happen.

There are several plot threads that are left open by the end of this work, but considering it is the beginning of a series, I can understand why that is. Still several of them were core to the plot, but they didn’t go anywhere by the end of it.

As much as I loved so much about this work, Shanara really disappointed me and that shouldn’t have happened. It’s quite clear that she’s the main threat to Damien going forwards and as such she should have had more presence than she did. One side of a story isn’t all of the story… and there’s a lot that I felt was left on the table here.

The story is really well done, the characters are amazing and the world is richly told. The problem is that the Succubus of the work isn’t. And it’s not clear why she wasn’t.